It's two days to my presentation.

The version on my flash was totally corrupted, but fortunately most of it was backed up. I'm meeting with EEbEE and maybe some other people early on Monday to do a run-through.

Trevor's back, but he's starting a new job on Monday so I don't know if I'll be seeing him again in a while. It was nice to have someone to talk to in the lab!

I got an email from my supervisor saying the usual 'wow you're calm!' and good luck type stuff. Plus to try and avoid making last-minute changes. Last-minute is all relative. Isn't it? I really don't care anymore, I just want to get away from wits. The idea of spending another 2 months there before I get a break is HIDEOUS!

I made almost all my graphs today, just a representative colour one and another set of weights graphs to go. I am now a official expert at Statistica graphs. and I found where they'd hidden the post-hoc tests, but I don't understand the printout, but it looks like I may have a significant result in behaviours! Lets hope the people I practised on don't think I'm lying when they see a different set of results in the trial run and the final!

I think I'll also feed the roof lizards tomorrow instead of on monday (so they get their 'weekend' 2 days off a bit later) because I won't have time on Monday and I don't want to have to feed them in the dark. Plus I have to move a couple more up there so I might as well.

In other news I had a huge fight with my friend James. He's become very much a high-school girl type guy at the moment. It's hard to explain. I also had a long talk with Justin and I think we'll be shoe-shopping again soon. I also worked the other night, which was really cool because I got to work with my boss for a bit (she's a really good friend as well as my boss) and then with Matt, who's one of the nicer kids. He spent the shift showing me all the life-lessons to be learned from 'The O.C.' and an eight-year old girl told me all about how she watched Dr Phil every day.

My parents are being all supportive, which is strange. They;re watching Inspector Morse, so I'm safe for another hour... 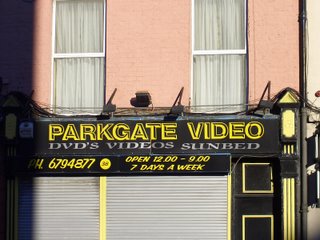 This is from Ireland. I'm thinking of sending it to my boss as a suggestion for expansion. DVD's, videos, sunbeds, manicures, squash courts...

and it'll be over and then you can start thinking about doing the same thing for masters!

sorry. that was evil

work is boring
i love books. but they make crappy two way conversation

did you try turning them sideways and making the pages move like mouths?

Meyda Tiffany lamps are one of the greatest creations [B][URL=http://www.tiffanysfree.com]tiffany[/URL][/B] under this label of luxurious lamps. These lamps are a statement of elegance [U][B]tiffany sets[/U][/B] and there is no mistaking their beauty. There is much enjoyment to be found in the [B]tiffany engagement rings[/B] presence of these artistic light pieces.

Tiffany lighting first made its emergence on [B]tiffany engagement rings[/B] the scene in the 19th century and they popularity continues today as the beauty that has [U][B]tiffany pendants[/U][/B] started so long ago continues to light up many homes in this country. Although, originals of this type [B][URL=http://www.tiffanysfree.com]tiffany jewellery[/URL][/B] of lighting are expensive and rare there are many reproductions that have [B]pandora jewelry[/B] passed down the look of the original handcrafted glass pieces.


Another distinct output of Meyda Lighting is the original [U][B]tiffany engagement rings[/U][/B] Coke stained glass lamps and chandeliers. They also offer a large inventory of stained glass lighting and decorative pieces. These [U][B]tiffany necklaces[/U][/B] collections include the Old Forge line, the Craftsman [U]tiffany jewellery][/U] Signature series as well as the Tiffany Gifts and Home Accents [U][B]pandora bracelet[/U][/B] to name a few.

This company began by accident [B]tiffany rings[/B] what Ida Cohen requested her husband, Meyer, craft a stain glass window for the kitchen of their home. Enjoying the process, this [U]pandora[/U] hobby soon evolved into a profitable business. This glass [B]pandora bracelet[/B] lighting d¨¦cor began to be professionally manufactured. Meyda [B]tiffany pendants[/B] Lighting was born from Meyer and Ida [B][URL=http://www.pandoraforyou.com]pandora bracelet[/URL][/B] and the rest is history.

While these products can be pricey, they offer high [B]tiffany earrings[/B] quality that is crafted using proven and tested techniques. But these [U][B]pandora necklaces[/U][/B] elegant light fixtures are an investment that is worth having in [U][B]tiffany uk[/U][/B] any home or office. If you are looking for [U][B]tiffany earrings[/U][/B] a d¨¦cor that is truly unique and will [U]tiffany london][/U] standout Meyda tiffany lighting should be a definite consideration. Every [U][B]tiffany sets[/U][/B] single piece is created with a heart full of desire for absolute perfection in glass lighting. Even [U]pandora[/U] amidst the many imitators out there, the real creations of Meyda can easily [U][B]tiffany london[/U][/B] be spotted since they stand out in the quality and overall appeal.