I surprise myself sometimes!

I don't believe what I did today!!!! More on this later. Being a control freak I'd rather settle my day in chronological order.

I had an early start by going to make up a quarter of the female population at a 'men's club' breakfast thing. No, I'm not confused, I was invited because my cousin was giving a talk on his masters project, and I was invited. It was actually really interesting and I'm so proud of him because he's done such amazing work. Not that I can really call it proud, I never really knew him that well until a year ago when his little sister (the cousin I'm closest to, being that we're exactly a month apart age-wise and spent our childhood being inseperable and not admitting that we were cousins becuse that would in some way invalidate our friendship) decided that I needed a mentor and he needed a 'mentee' and got us to email each other a lot. So I'm not really proud in the "I knew you could do it!" sort of way. More that he's part of my family and he's actually going to do amazing things and I can say "that's my cousin!" and stuff.

After that I rushed over to wits to check on my lizards, and then I tried very hard to start on my presentation for next week. I made 2 slides and then didn't even bother saving them.

When Luke finally woke up (shame, he's tired. Silly kid works too hard...) and got to wits I helped him with dung analysis, which wasn't all that bad because we had music and we could talk and I found a locust leg which was pretty cool! We managed 8 samples between us, which is pretty good, considering as far as I understand it he usually gets through about 3 or so in a session. It smells bad though, I think I got the damp samples...

After that I rushed off to work to try get there early enough to talk to the girl who works at the pet shop because she's organising for Free Me to have a stand at Yebo Gogga (one b, I got it right!) and the people who were supposed to email me didn't. when I'd finished all that I saw that Jo and Lara were having coffee next door so I joined in to listen to Joey bitching abut Justin who has now got a new job at the bookstore and is cutting down on his shifts with us.

In a kind of bad way I'm glad he's being nasty to other people because we used to be really good friends, and lately he never talks to me or anything and I was feeling all 'I did something wrong'ish about the whole situation. He's become a bit of a brat lately, and at one stage he decided that, even though he doesn't need it and isn't even planning on going to university, he will die without a R13000 Apple mac laptop. He even told his parents to draw money out of their bond to pay for it. I'm so glad his dad said no!

The rest of the shift was fun, Lara and I always have fun when we work together, we ended up watching 'An American Tale' which I'd never seen. we're restricted to watching family movies at work because the kids like to sit on the carpet and watch and anything with a PG rating is out of the question. It's the movie with the 'somewhere out there' song. it turns out that it has a singalong version as a bonus, so La and I ended up singing along to it really badly with lots of giggling and I think we scared some customers. I also met a friend of Lara's that was in my class in first year, although we don't remember each other.

Anyway, back to the title... one of our customers came in while I was in the shop alone (I think Joey and Lara went outside to smoke and Chris went with them and I ended up chatting to a customer who wanted every Vin Diesel movie ever made because she might be having a meeting with him in the next month or so. It turns out she's partners with that Michelle lady (I forget the surname), I think for Top Billing and they make all kinds of wildlife documentaries and stuff together.

When she left I told Jo all about it and she got all excited about Vin Diesel and so on. Anyway this lady and the Michelle person (I'll remember the surname at some stage) were having drinks next door and we did a lot of casual 'walk-bys' and at one stage I heard them on the phone talking about wild dogs and I got all excited and did a lot of 'why did I let an opportunity like that pass by...' and so on. Finally (and this is where I shock myself) I went over there and introduced myself and begged like crazy to be allowed to go with them at some stage and see how they shoot footage and handle the animals and so on. Michelle was in the bathroom at this stage.

The other lady was really keen to hear all about my project and wanted to film it (it's really a boring to watch, lab based thing, so not suited, as I kept telling her!) and it turns out they love filming people's stuff from masters and PhD stuff and they know almost everyone at wits (it seems biocontrol and the snake lab mostly) and it's so cool! when Michelle finally made it out the bathroom she was all really really nice and very keen for me to go along on a shoot and they gave me business cards and told me to get in touch.

I can't believe I went and did that. In reality I'm extremely shy around people I don't know, and could never do that!

Oh, and Lara agreed with me about Chris, which felt fantastic. He was all sulky again today, but it was fine because she was there, Tomorrow should be interesting!

So I'm feeling a lot better about life in general. All that's missing is the stupid lizard in the wall :(

Here's a sunset picture from Suikerbosrand. It's not from the usual sunset spot, so it's a bit interesting! 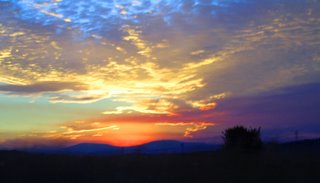 that was good! im glad i didnt make you repeat yourself too much when we chatted. I could never keep one of these things....~Eleanor

OH my gas Helen! YOu are gonna be a MOVIE STAR!!!

Now...if only I could get in as your experimental assistant...

so you get to go all over the world next year... I want to be YOUR assistant! (I'm already a PA, I think it's time for promotion).