Teh Australian just gave me some music. He has a strange taste in music, very chilled to the point of Bob Marley, but all Australian artists. I don't really like Bob Marley (sorry EEbEE) but the Aussie equivalent is pretty awesome!

Right now he's playing a something by 'cat power' which is kind of Norah-Jonesish but a bit more upbeat and she doesn't sound like she's suffering from emphysema (I love Norah Jones, when I have the flu I can sing just like her!).

Anyway yesterday was insane! I had two elctures for Ecophysiology which meant I had to read 12 papers. the first 5 were ok, and we had a pretty cool discussion in class, AAA was actually very cool compared to his last set of lectures. EEbEE managed to get picked on and shot down and it was really funny.

The next 7 were really nasty involving lots of maths and fractal geometry (which I understand now but not knowing made reading the papers was a bit difficult!)

Anyway I have 5 to read for about 2 hours time. I've read 3 and a half. They're written by MORONS! the one I'm on could have been written in less than 10 pages, but for some reason they felt the need to use 19. NINETEEN!!!! It's a cool topic but I'm losing patience!

Anyway, back to yesterday... Sarah met the Australian, it was really funny! I had to focus very hard to concentrate on my stats project. Oh, yes... I forgot... the stats marks are up and I got 88% which is second only to Laura who got 90%. I know I really shouldn't be as annoyed about her beating me as I am, but I looked thorugh the lsit and had a "I'm top of the class!" moment, and the Luke had to say "no, there's a 90..." So now I'm annoyed. But I'm also pretty happy because I was scared the exam would pull my average down and it didn't. :)

My brother and I have been watching 'The long way round,' it's a series with Ewan McGregor and a friend going around the world on motorbikes. It's really awesome and makes me want to travel! Anyway we finished that yesterday and I'm quite sad, it was fun watching something with him, we never really talk anymore so I enjoyed having some QT.

My supervisor also didn't leave because they couldn't pack in time, so they need an extra day, but he's so distracted that I can't really go to him for help without coming out exceedingly confused. It's like I'm having one conversation and he's havig another one with someone I can't see! But I need to submit an abstract for the conference and he said he'd help me. It's just a bad time and I really don't care about the conference. They said I'd only get funding if I presented, then they said they ran out of funding, but I still have to present. To be honest, I don't particularly want to go. It would be cool, but I'm such a reluctant herpetologist and only by default, I can see it being really awkward being surrounded by people like Dee and Bryan.

Besides, at the end of the year I intend to have a quiet nervous breakdown and go on holiday. If I end up mole-rat trapping and doing a project with Dee and TAing on the field trip I won't have a break from December until the end of my masters.

Anyway, enough whining, I have work to do! I think I'll go to the honours room and sleep for a bit. I had coffee yesterday and spent most of the afteroon trying to not pass out (how's that for a split infinitive!), so I think I'd better find an alternative way of boosting energy levels! 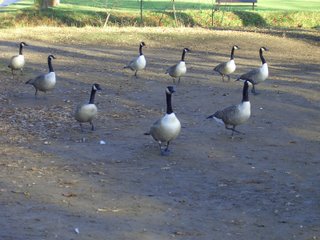 These are English birds that tried to attack me. I don't know what they are. I suck at bird identification (but am remarkably good at tree identification. Which is strange because I love birds and hate plants!)

the australian and i are great friends!

no... ok... we're not there YET but we will be if i have anything to say about it DAMMIT!

why do i embarrass myself so much?

but like i said to helen, i am willing to marry him if he'd like 2 become a south african citizen, but only if he understands that there'll be no hanky panky

So, you know when you have a sheep?

Hi, i was looking over your blog and didn't
quite find what I was looking for. I'm looking for
different ways to earn money... I did find this though...
a place where you can make some nice extra cash secret shopping.
I made over $900 last month having fun!
make extra money