It's been really hectic, and my home internet has been a bit ridiculous lately, which is why I haven't posted. Anyway the stats is still not cooperating. I sat down and clamly and logically listed all of my predictions, handled the data, tested all of them and all are not significant. I've got one Chi-square to do still, but my sample size is far too small to pick up a difference (stupid degrees of freedom!) so I'm not hoping.

Anyway yesterday, beween generous helpings of stats (how's that for a mixed metaphor?) I met the new guy in our lab. he's really nice and very Australian. Then I settled down to do more stats after feeding all the animals and skipping a seminar on biocontrol and was asked to help out making testosterone implants. It was really awesome because I've read about them a million times, just never had an opportunity to see what they actually look like. Particularly since I'm supposed to be using them next year.

Basically it's a really finicky process, you cut a tiny length of silastic tube, glue one end to seal it off and wait for it to dry. Then you use a micropippette (I had a mini-tutorial on how to use one :) just because it's cool) and put a tiny bit of testosterone-DMSO mixture inside and the glue the other side. They're so little you have to use little forceps (even finer than the ones we use in dissections) to hold the tubes. My job was basically holding the tubes while the new guy filled them (no pun intended?). It's harder than it sounds because if you squeeze too hard the liquid doesn't fit, but if you don't squeeze hard enough you drop it. I dropped 3, one or 2 just didn't work so we chucked them and one broke the seal at the other end and squirted me with testosterone.

It was actually a lot of fun to get away from the computer and actually do something productive. Plus the new guy is awesome in that he talks a lot. I've really been lonely in the lab this year. Trevor is way too dedicated to chat about movies and music and what a twat Locke is!

Anyway after that I organised with Dee (who is back from fieldwork!!!!!) to give the new guy a tour of the animals in his lab. They have some awesome stuff, like bullfrogs, frogs, an eggeater, some geckos, a stunning legless skink and a new snake that Dee called a centipede. I'm not sure but it's really pretty but freaked out at my handling it so I put it back.

After all that it was about 4:30 so I rushed to finish my stats so I can show it to my supervisor today. Nothing exciting, just the usual round of non-significance. My supervisor said I won't have a problem publishing, and I know that a 'no' is as much of an answer as a 'yes' but it sucks!

So I woke up this morning to realise that in all the excitement I had entirely forgotten to read the 12 articles for lectures today. I read 5 of them in bed this morning, for the 11am lecture and then I'll have to read the next 7 before the lecture at 2pm. 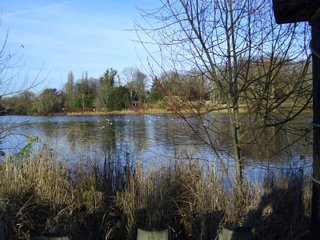 This is a picture of part of the African Plains section in the Dublin zoo. The zoo is so fantastic, I'd love to work there one day! They're about the same size as our zoo here, but they use the space so much more efficiently and the enclosures are fantastic!

helen!! i walk past the room some times and i hear the new australian man and i want to meet him! so next time, i'm gonna come 'visit' 'you' ... he he hehehehehehe

ok, he's not here now though, and he's going away for a month tomorrow, so just walk in next time you hear him! Just please don't do the "I speak foreign too!" thing, it could get awkward!

I have had many a conversation with 'The Australian'. He is cool.