I didn't go to wits today! It was so cool! I slept in, watched some extras from the Lost season 2 part 1 box set and then went to work.

At work Chris behaved himself and we actually almost had fun working together again. Justin was working at the bookshop and I went and had a nice long chat with him, which was fantastic, I've missed him so much.

We also watched 'Saw' - a really gruesome movie that we started watching a while ago but stopped because we were eating. Today I forced myself to finish it so I'll never have to watch it again. It was really nasty, one of those movies that is gruesome for the sake of being all gory and disgusting. Had a really cool twist at the end though that I really didn't see coming! I don't think I'll be watching Saw 2 though. As much as blood really doesn't bother me, I don't like movies that just splash it all over the place for no real reason (Tarantino and I just don't get along...).

Anyway I got home to find that my supervisor finally responded, and it's a mix of option 1 and option 3 (i.e. he wasn't checking email and isn't angry). He was really really nice and kept telling me it was ok and happens to the best of us and so on.

After that I went to church. I ended up driving my mom there, which was fine until she kept braking on the passenger side (you know, hitting the phantom brakes) and then getting all upset because she thought I was offended.

Church was interesting, the speaker was someone I've heard a few times before and really respect, but I had huge issues with what she was saying. It was basically that if you pray for something and don't get it it's because you were given a very little bit of power and should have prayed harder/longer. I sat there going hmmmmm...

Afterwards I just came home and found that my friend in Canada was on MSN! It's so exciting when that happens because with a 6 hour time difference we don't log in at the same time very often at all.

Anyway it's been a pretty good day overall, and I'm feeling a lot better about the upcoming week than I did on friday.

here's a pretty sky shot to start your week! 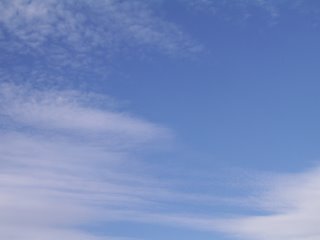