I know I should really limit myself to posting once a day, but I figure I miss out on days sometimes, so I might as well keep going whenever I get a chance!

I got to wits really early today and cleaned the iguana's tank (it's really dirty and it bugs me that she has to live in a dirty tank. Her new bigger tank should be arriving soonish though). Then I went and watched the last of the footage from the experiments (yay I'm finished!) and also managed to get some screenshots and videoclips. I also checked on the other little guys in the next set of trials, they were mostly hiding though, I really hope none of them got out!

After that I was going to come home and grab some lunch before work, but it turned out that Vanessa was at wits and had had an awkward moment in my lab (long story, she seems to have a lot of them ;) I'm not sure why) so I decided to stay while she had lunch. It was actually really nice to sit in the sun and chat, every time I sit and talk to her I realise that I don't know her as well as I'd like to, which is sad.

So anyway I ended up rushing straight to work and I actually took the highway! Driving is definately getting better! Work was hectic as usual but I managed to mark 2 essays, one of which was TERRIBLE and one was brilliant to a state of being overdone. I actually ended up resenting the person who wrote it because I just couldn't fault her! I also realised that I ended up with 2 clever people, one reasonable person and a total moron. I've only got 4 to mark at the moment because everyone else got their fair share and I have to handle all the late submissions that got special extensions for next week.

So anyway I just watched "Stay" with the guy from "The notebook" and Ewan McGregor. It's definately the weirdest movie I've watched in ages and I didn't enjoy iy while I was watching it, but now that I've had a few minutes to think about it I think it was actually really good. It made me think a lot. It's also one of those with a really confusing plot that's only explained in the final few moments, but there are still loose ends that I'm going to be thinking about for a little while. I'm glad I watched it, but I don't think I'll be recommending it too much, mainly because it appealed to my rather strange taste in movies. I know Chris would hate it!

Speaking of Chris, Lara and I finally got him to drink alcohol for the first time tonight. It was the 'Saturday night special' which is hot chocolate and amarula. We really shouldn't be drinking it at work, but I'm not really caring too much at the moment. I'm really tired right now so I'm going to go to sleep. 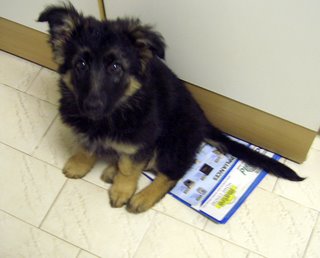 This is a really bad photo of Jesse when she was a puppy. It's the only photo we have of the night we got her. She's a lot bigger now and a total brat. She's a beautiful dog though and everyone loves her because she's pretty shy around strangers and doesn't bite them like Max does.

'the guy from the notebook' has a NAME Helen!!

and i love him

I know he has a name, everyone has a name. I just didn't happen to know what it was. Now I do. Thanks!