I love butternut soup! It has a way of making everything so much calmer. I don't know why, but if you're all stressed and you sit back and have some soup everything clicks into perspective. I like tomato soup too, but that's more for when I'm sick or cold or miserable.

I'm writing all of this because I'm sitting in front of the computer with about 8 journal articles (make it 7) and a big cup of butternut soup. It's all because of stats.

I understand that stats is evil and horrible and invented by totally crazy and sadistic people. I also half-wish that I was living in the 20s when a t-test was the essential test and nobody asked questions. I also must admit that I do kind of like it, in a weird, quasi-masochistic kind of way. It sucks, and it's complicated, and it takes forever just to handle and process and format your data into something that you can use it on, but it's also the tool that can turn your data from a series of pretty pictures and meaningless numbers intosomething real.

After today I am a firm advocate of the "Lies, damned lies and statistics" school of thought though. Here's what happened:
I spent a week of my life cooped up in a smelly basement room (actually it's ground floor, but it's in the middle of the building at the end of long and gloomy corridors and locked doors and it has no windows. Hence: basement), running trials.
I spent another week of my life looking at video-footage of the trials and taking notes and writing down times and so on.
I spent about 2 days actually typing 200 hours worth of data into a computer.
I spent an afternoon doing stats on it.

The result: NOT SIGNIFICANT!!!

So I looked at it, retested a few things, saw that my data was arranged wrong and the pairings weren't actually pairings at all and felt a glimmer of hope. Reran the stats and... NOT SIGNIFICANT!!! So I retested things and transformed my data and reran the stats. The results... NOT SIGNIFICANT!!! At one stage I even transformed my data into proportions so that I could use an ARCSINE transformation, but then I figured it was time for soup.

So then I went to church and tried to concentrate on a really interesting sermon, but all I could do was think about how to restructure my dataset for a contingency table. On my way there I got a phonecall from my friend Dee who was panicking about tomorrow's 12 readings because he just can't seem to download them and I realised that in my stats bubble I'd entirely forgotten that we had a double lecture with readings tomorrow. I have all of them at my computer at wits, but I think 12 readings tomorrow morning isn't going to be possible with all the lizard duties and so on, so I tried to download them. I managed to get 7 of the 12, which is enough of a start. Generally when I have to read stuff for lectures I either sit at my desk at wits with a strong cup of tea (I miss coffee!) or else i wake up early and read them in bed, making notes in the margins so when I fall asleep again I have some record of actual thought processes. So 7 in bed and 5 at my desk should work.

Anyway now that I have had some soup, I have come up with a gameplan:
write out my hypotheses and preditions.
Figure out how they link to my data.
Run simple tests to see what's going on.
Restructure data for complex stats that I need my stats programmes at wits to run.
Sleep

So: Lies. damned lies and statsitics? I'll translate it into my terms: "If I can't get the results I want, I'll find statistics that will give them for me!"

The problem is that it's hard to be calm when one supervisor has left now and the other one is leaving onTuesday morning and I want to go over the stats with someone who should understand what's going on.

Anyway I'm going to go and wash my soup cup and do some more stats.

Oh, and exciting news: it turns out that Live is coming out here to do a concert again! And Lara and I have organised to get tickets tomorrow! The bad part is that the concert is 5 days before my thesis is due, but I figured I'll be needing the break. Live has a very special place in my heart mainly because when they came out here the first time it was my first concert. I went with my best friend Gloria and we had such an awesome time! then in second year they came out here again and it turned out that two of my friends who I had met more recently had also been at the first concert and I ended up going with my friend Linda. they've also booked this really awesome SA band called the Parlotones to open for them. I was the first person in my group of friends in highschool to know their music so I'm so excited! When Lara told me about it at work today we ended up doing a very girly jumping up and down in circles squealing thing. It was really funny. 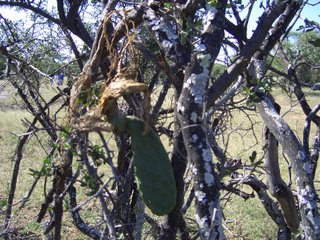 This is what should happen to all alien invasive plants. This is the remains of a prickly pair that we stimped on, ripped out of the ground and then hung up in an indigenous tree. I would name the tree, but that would be just too sad.

YAY!!! Helen!! i've been trying to comment on your blog for DAYS and was going to tell you to change your settings today, but you did it!

and you used the title we came up with! i'm so proud and happy...

I didn't change the comment settings at all! That's weird...

I think it's time we forced Vanessa to start a blog, she's the only one left now...

I'm proud to see that you have a blog...You are one of us now!

BTW, good to see you are educating the masses about the hazards of Opuntia...

Ha ha! I'm the only one with a picture!

I hate stats...so helen, I can feel your pain! I just got home from dinner and tried to do stats instead of sleeping: BAD IDEA! And now I am being very productive and commenting on your blog. sigh.

You'll have to show me how to add links, I though I understood but it didn't work :(
and for the record it's Opuntia , you're supposed to italicise genus names! Or did CLS teach you nothing?

i also don't know how to link!!
and luke. yes. you are the only one with a picture. but its only because you seemingly refuse to help those of us who are technologically defunct. thanks.

Like I said on your blog, the pic is on the way. I just felt like lording it over everyone.