I forgot the cool title :(

It's been an ok day, particularly considering what yesterday was like!

Last night my parents only got home at about 9:30, by which time I was already in bed. My mother got all sympathetic "Are you tired my girl? You deserve to be!" and so on, which is very unlike her, and not much appreciated by me (I'm a stalwart of the 'stiff upper lip' tradition).

I woke up aching all over and just couldn't bring myself to get out of bed. Considering I'd measured 19 lizards yesterday (WOOHOO!!! 19! 19! YEAH!!!) I figured I could move slowly, so I got here by 8 (by some mystery it's always 8 when I get here) and measured the rest of them.

I fetched a STACK of marking (if any of the tAs are reading this, be prepared, there's a LOT of it!) and then ran into one of the second years, not very affectionately known as 'the annoying guy' by most people. I use it because it's convenient, he's actually a pretty sweet guy, albeit obnoxious at times. He was battling with a project with group members who had bailed on him and left him picking up pieces. It involved using a computer programme that I'm vaguely familiar with, but he didn't even know how to open files in it. Did I mention that this project was due by last friday? Well I did now.

Anyway he was all very grateful and promising me alcohol, which was very sweet and made me feel a lot more validated than I have in a while. It was also nice having someone to talk to, as everyone else is on fieldtrips except for one or two people who I don't normally spend time with (me? cliquey? NEVER!!!) but I'm getting to know them now!

Anyway back to the lizards: By the time I'd returned the ones I didn't need and fetched the ones I did need, and measured the wrong ones a few times and then put them all into the next lot of experiments and fed them it was about 4pm. I got back to the lab all exhausted to see my other supervisor walking down the passage. She lives pretty far away and i think I've spoken to her twice before, and my other supervisor isn't around at the moment, so it was mildly awkward, but I really do like her and she's really nice, so it was ok. She came and looked at the setup with the lizards, didn't say anything, which I hope means it's ok and then sat at her computer and worked, like everyone else in this lab does all the time. I feel like such a slacker sometimes!

So that's pretty much my day, except for one thing: I got a new mouse, a sleek little laser thing (before I ahd a really lousy ball-mouse so I had to bring a mouse from home to avid going crazy) and every time I click it squeaks and no, that's not a pathetic pun because I'm tired. It sounds like there's a rusty spring inside or something and every time I click it's like an old gate being opened and closed. And opened and closed. which can totally ruin your day! Just thought I'd mention it!

anyway here's the picture of the day: 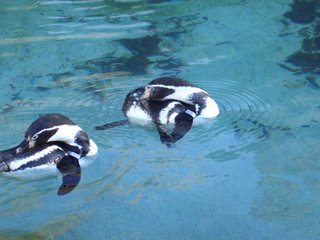 I love penguins, I think they are some of the coolest animals on the planet (except for my lizards of course!)!