The healing power of...

I was goig to put "The healing power of lizard urine" in the title, but it's not true. Yesterday they peed on my hands so much that my bandage was soaked, and my finger felt a whole lot better. I restrapped it with a clean bandage aftrewards and then today, once I'd been well and truly peed on again, I took off the bandage to find that although the swelling has gone down I can't actually move my finger. Or touch it. Or use it to touch anything. I think I'll go get it xrayed on monday. For now, due to the overwhelming lack of anything useful in the lab (but a lot of interesting stuff, last week we found a vervet monkey skull in a box full of camera equipment), I have now strapped up my finger with electrical tape.

My worst nightmare just came true. I was weighing and renumbering lizards this morning, and the third-last one got away. He's in the wall between the study and the lab and I don't know what to do. I've found a replacement in the stock for the experiment, but that's not the point. There are 3 scenarios: firstly, I could catch him by some complete and utter miracle and everything would be fine (I'm likeing this one the best). Secondly he could get out and run across the lab and into the building and I'd get into a whole lot of trouble. Third, he could be stuck in the wall forever and starve to death. As I said: my worst nightmare.

There were holes in the wall inexplicably filled with crumpled paper so I lay under Emily's desk for about an hour enlarging the holes with some scissors (as I said the lab has nothing useful, would it kill them to get a screwdriver?) and clearing out all the rubble inside (a lot more crumpled paper and some gravel). I put a glue-trap inside but it didn't fit nicely, I'm just hoping! I also put 2 traps in the lab and another one in the study. I'm considering baiting them with catfood, but with the amount of cockroaches in the lab I think he'll be pretty well-fed if he gets through!

I'm really really upset, partly because I've never lost one permanently before, there have been a few close calls, one actually got out on the roof once but I caught him, but this is such a nightmare. I don't know what to do. And to be quite honest I think that there isn't anything I can do.

Anyway I'd better go and put the others out on the roof and feed them. I have to be at work in a few hours so I have to hurry. If I finish in time I can stop and get some bandages on the way, electrical tape looks a bit ridiculous! 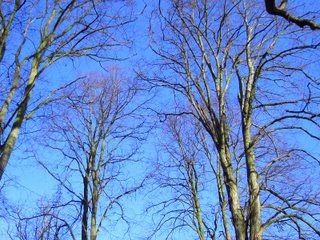 This is from Nottingham. The sky is the wrong blue. Nothing beats a South African sky at the end of summer when it's so blue it looks like it's been painted. The trees in Nottingham are awesome though, I love huge big trees that are really established. Here the tall tall trees are generally really skinny.