So that's what trusting people does to your life?

I took the word verification off my comments section yesterday, and got here this morning to find comment spam (gasp!). I'm so annoyed. I mean, if I don't turn it on again how long is it going to be before I end up with adverts for viagra, preapproved loans and free stock advice all over my blog? And word verification is so annoying. I mean when we had the fight in Sarah's comments (http://abfablife.blogspot.com/2006/08/sigh-i-educate-you-people-so.html) it was a lot of fun, but imagine if between each nasty remark we had to sit typing njkwdri or jefiernf? I guess it's one of those things that's there because it's a good thing but you wish you didn't need it. Maybe in time we'll have a revolution to change this spam-infested world we live in. I'm tired and listening to the australian's music, which is why the whole paragraph didn't make sense. I'm sorry!

Our lectures are exhausting, we have 5 lectures in 4 days, with between 5 and 7 articles to read for each class. We're all fried and I think I made a groundbreaking record of stupid coments/questions in class. I did say one or two things that AAA liked, but mostly it was just him looking pained and saying no a lot.

Anyway my supervisor and the Australian left yesterday. I think Phil felt pretty bad about me staying here all alone, he looked pretty sheepish (hee hee, sheepish! Sheepish! hee hee! that's funny!). My supervisor pretty much told me to keep him updated and to make sure I water the plants. Translated that means he's about to drop off the planet for a month, and I must try keep his plants alive or else be the object of ridicule for the rest of my academic career. I said to have a good trip and that I had an hour and a half after he left before something would break or explode.

Weirdly enough, just over an hour and a half later I was faced with a decision regarding euthenasing a bunch of sick animals (my equivalent of something exploding, I really love the little guys), and then I dropped a rather huge brick on my finger. It was more like I was swinging it to put it down somewhere (so it was moving pretty fast) and as it landed my finger got in the way. I said a lot of flowery anglo-saxon phrases (my co-supervisor would be proud) and proceeded to watch it swell to ridiculous proportions and change colour.

By the time I got home last night it was the size of my thumb and black (it's my little finger). I went to a braai and showed it off to some very impressed people. Then one guy decided that it was his life's mission to kiss it better and I stopped showing it off and concentrated on annihilating the opposition in a game of 30 seconds. We won but I got annoyed because my friend Helen (another one) is just way too nice and every time the other team made a mistake and should have a lost a point she gave it to them. Every time.

We played again in different teams a bit later and I won the personal high score (getting my team to guess 6 words in 30 seconds) but we tied with another team and played 3 very intense tie-breakers tieing each time. So we gave up and went and ate a lot of meat. It was quite funny because the third team was really lagging behind so we all started helping out, so their person would describe the words and all the other players would try guess them. It didn't help them much.

My parents got back from the Cape yesterday. My mom thinks it's a nice thing to do to show me all the photos of the whales they saw in Hermanus while I was stuck in the lab. And she took a lot of fuzzy photos of blobs that she swears are birds, so that I can identify them for her. So I identified the trees that the blobs were sitting on (or rather made up names, I'm not great with fynbos).

Here is a (censored) photo of my finger. You wouldn't want to see the unwrapped version. Actually I don't know, I'm scared to look myself, although the swelling has gone down a lot since yesterday. It looks a lot more impressive in real life! And it really hurts (sob). I'm going to go read articles now. 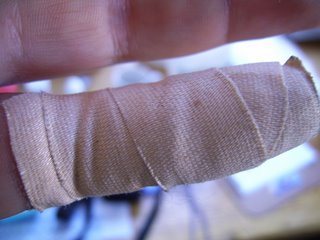 sigh... people! comment spam - how mush does THAT suck? but you can delete it... or you can leave it there as your first ever spam message.

sigh ... no australian... sigh... i had a weeeeeird-ass dream about a person called Phil... i know a few Phils, so am confused about which one this dream focussed on...

thanks for the clarity in advance.

Hi Travis, nice to meet you! "braai" is the word we use for "barbeque" I'm not quite sure why... It can result in some pretty pathetic jokes too ("do or braai" and so on).

ok, so you and sarah are interesting.

i'm going to be checking back occasionally.

i haven't been to a braai in a while.

they don't have those in korea
but i did find a kick ass western style restuarant (owned by an american soldier) that has some rockin' barbeque chicken wings!!!!

so I guess thats good enough

oh and by the way if you want to try some interesting new music check out:

no lyrics, just interesting music (if your into that sort of thing)