Why do stupid people write essays that are so much LONGER than clever people's?

I've jyst been marking. Well, first I got up, swore because I was late again and tried to rush to wits. Except there's a cycle race or something so all the roads were blocked off so I had to take the highway. It's the first time I've been on the highway inmore than a month. After my car accident I've become a somewhat nervous driver so I'm afraid of going fast. Or turning suddenly, or being surrounded by cars. I refuse to see it as a problem just yet though, because it's getting better.

So anyway when I finally got to wits I chatted with some of the people who were about to leave on a field trip. Melanie was there. She's one of my supervisor's prospective honours students for next year. She followed me around for about a week to try talk to me, then I was nice and she's ignoring me completely. Did I mention that she's the world's most unenthusiastic prospective students? I remember being nervous and a bit withdrawn when I was first getting to know my supervisor(s) and not being too sure of what to do, but I really don't think I was as bad as her. So she ignored me again so I hung around to make sure she felt really awkward. I don't like being ignored.

After that I set up trials again. I'm getting better, although I guess it's a bit pointless to be proud of setting up in record time today, because it's the alst big setup. I just have to do 4 trials tomorrow then this section is over and I get to watch it for hours and hours and hours. literally. The joys of videotaping trials!

Anyway when I was done wioth that I tried to mark an essay and I'm so frustrated! It's not one of the best students, and the essay is appalling. At least it's relatively short, some of the KIDSs got really longwinded. But the way the memo is structured it works out that he gets an A. So I'm really annoyed because it's not fair on the ones who did good work to get the same mark as this guy. So I'm going to go whine about it tomorrow and try get a scale system going.

So last night was Vanessa's birthday party/thing. It was literally 2 minutes from my house at a pub type place that I've walked past a lot of times and never actually gone into. It was a lot of fun, although somehow it was another karaoke night. I seem to end up at those a lot. Fortunately I'm a responsible drinker so I've enver used the opportunity to unleash my singing voice on the community. My alcohol tolerance has definately gone very low, probably because I don't get out much at the moment. I reached the stage when nobody could understand me (I talk fast when nervous, excited or tipsy) and was about to reach the "sitting in a corner crying because I'm about to make a fool of myself" stage when I went home. It was really nice to get out of the house/lab for a bit though, and make a lot of noise and stuff.

Anyway I think I'll go home now, my family has this Sunday lunch tradition thing, where we all sit down together on a Sunday and have a huge meal. I usually work on Sundays so I miss it but I have the weekend off because of running experiments. Plus I really don't feel like working. So I'll go home, feel all guilty and then work on my writeup. Sounds like a plan! 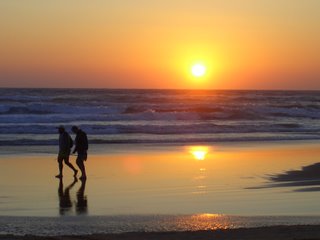 I took it at about 5am while I was waiting on the beach at Sodwana bay for the skipper so we could go diving. I only became an early riser when I started diving - I'd wake up easily at 4am because I'd be so excited to go diving. I really want to go on a diving trip at the end of this year. I was thinking Mozambique. Although I could always just go to Sodwana again and then go up to Namibia. I'm dying to go to Namibia! And a bunch of other places. I'll type up a list at some stage.

Anyway, I guess I'd better get going. At least my lap is dry today!