A really long bitching session about my boss's brother. And a bit about Lost.

I've just been watching Lost again. I don't know why I bother, all it does is confuse me! Actually I'm pretty badly addicted, and I've got a whole bunch of episodes to get through. I'm watching the second season and I'm almost through episode 18.

The weird thing about Lost is that they never tell you anything and then in one episode they'll explain a whole bunch of stuff in a way that's either a gigantic letdown (a pillar of black smoke?) or leaves you more confused than before. I like it because it's all a 'big picture' in that they have to figure out what's going on, but not like '24' or 'prison break where there's a set time-frame so I just get frustrated because I know they aren't going to resolve anything because they still have x number of episodes to get through. I like Prison break though, but I was watching it at work and I can't remember how far I got. It's on my to-do list for December.

Today has been an extremely frustrating day. It started off raining, which is bad because I can't get any data from my experiment. I went to wits anyway, just in case. I left for work and on the way there got a call from work which I couldn't answer. When I got there Chris, the kid I work with, yelled at me because he'd been really busy. He's my boss (and friend) Jo's little brother and as soon as she (or the other staff who are good friends with her) isn't around he treats me like complete rubbish which really annoys me. I was already in a bad mood because the traps didn't catch anything and the lizard is still on the loose, but I hung on to my temper and was very polite back to him.

Basically a Sunday morning shift is really horrible because we have a lot of returned movies to process. A returned movie goes through 3 stages: it's handed in and checked and scanned to return it on the system. Then it's added to a pile by the credit card machine. From there, when the pile gets bigger, it's taken to the back and switched for the pretty cover (which is empty) and put in another pile. The third step is to take the pile of covers and put them back on the shelf.

There's already a minor conflict here, Chris and I both prefer putting the movies in the back to putting the covers on the shelf. Every Sunday for the last year and a half he's tried to force me to agree to do all the covers while he does the back. It's minor, but after this long it really annoys me that he tries this every time,just because he can bully all the other kids (I'm an adult and thus 'in charge' of the shift. I also get paid more than him) into doing what he wants. Generally I try to handle the covers he's processed and make sure I do my fair share in the back.

Today there was already a huge pile of covers because I'm allowed to come in late on a Sunday and Chris had taken full advantage of being alone in the store (kids aren't allowed to work alone), so I returned all the covers and then handled a whole heap of other returns and made a new pile. He ignored it. I kept adding to the pile and it kept getting bigger and bigger. He hogged the main computer (where the returns are handed in) and processed more returns. I put the covers away but left the big pile that I'd handled for him to sort out. He ignored it. This went on for about 2 hours. Finally I took a heap he'd done and told him that he must handle the other pile.

He walked over to it, looked at the movies and then, looking me in the eye he told me that I must, because he'd done them all and he particularly remember putting one of them away. For the record, I remembered it becasue it's the only copy we have of that particular movie and I'd been keeping an eye on it in case he argued to show that I had done it. He knows the movies really well and there's no way he made a mistake about it. So I lost it. I turned around and yelled out something along the lines of "Don't you lie to me!" and so forth. He stalked off, and a bit later startin slotting other covers into the pile I'd made to make it look like a new pile. I was watching him and I pulled out the new ones and put them away and left him with the pile. Finally he got all angry and put them away.

Then he came back and again said "I'll do back and you must do covers." I said "No" and he said "yes" and so on. After that he refused to leave the main computer for the rest of the shift, banged everything around like a sulky teenager and if i asked him for change for a customer he threw it at me (it got a few raised eyebrows from the customers, particularly because they all know him as the one with no people-skills who never knows how to talk to them).

When Jo came in a bit later I told her what had happened and she took his side as usual. It really annoys me because if it was one of the other kids she would have kept an eye on them and done something if she had to. This all sounds really really petty, but I'm stressed out and cranky at the moment. I've also been putting up with him acting like he owns the place for a really long time. It even got to the point where I've been trying to give up the shifts I work alone with him, but it's not going too well. I'm not quite sure what to do, the other people alsop have trouble but a lot of them have known Jo for longer than me and he knows that they talk to her, so he behaves a bit better. Most people just don't talk to him.

I feel really bad being nasty, because he's home-schooled with absolutely no people skills and all he has in his life is his job. That's why I've been nice to him for so long. the fact that he lied to my face and refused to apologise has ruined everything though, it's the one thing in life that I really can't handle.

I just reread everyhting and realised how petty it all sounds. I'm sorry. I guess when you're stressed out little things can wear you down. I also nearly got fired from my last job becasue the manager and her daughter decided that they didn't like me. I guess it's a bit of a tender point, but it made me a bit insecure about working with people who are related to each other.

Anyway I'm going to stop wingeing and go get some sleep. I'm sure I'll feel really stupid about all this in the morning!

Here's a pretty picture in the meantime. It's from Suikerbosrand, while I was waiting for Luke to finish getting GPS coordinates. 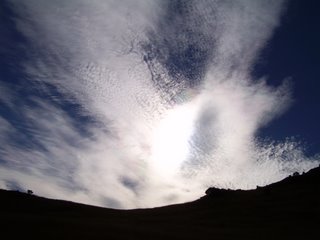 Apparently the baboon group climbed this hill at some stage. If they did, my congratulations are heartfelt!

there's always an asshole somewhere.
you can't escape them. every job i've ever had, there is always at least one. feel lucky that you only have one.

true that
i have a few @ my work! but sometimes it sucks when there's only one because then all your bitching is dedicated towards one person and then my catholic guilt bites me in the ass

its better for karma if you spread the bitchiness!

true.
spreading bitchiness is good.
wouldn't want everyone to gang up on someone.

I used to try and avoid it altogether, but stress makes me cranky. And crankiness makes me bitchy. It's been a long year. I'm very impressed at how much my friends put up with sometimes!

Oh, and I'm up to page 16 of my stats project, go me! Except I'm tired and going home. If one more person asks me for stats advice...

Did I mention that stress makes me cranky?

We, the baboon people, SO climbed that hill! I'm not entirely sure which hill it is that you are talking about but given the number of hill is that place that we did climb, we probably did.

hey can I get some stats advice?

did I mention that I get cranky when I'm stressed?

Ok, so what's the problem?