kind of an awkward moment

Everything went pretty well today, down in the 'smelly room' I cleared all of yesterday's trials, fed and watered those guys and set up todays set. then I actually managed to carry a bucket of dirty tiles up to the lab. Usually it takes two people to carry it. It only had about 42 tiles, rather than the usual 60, but it was pretty heavy!

I couldn't make myslef go down to the animal unit though, so I scrubbed them all in the lab. However I didn't notice that, along with a psychotic tap that sprays like crazy, the sink is positioned at a height just below pocket height (for lack of a better word), so after washing the tiles I looked down and saw that the psychotic tap had sprayed me all the way from my waist to my pockets. Putting it indelicately, I look like I just wet my pants.

Which is why I'm sitting at my PC with paper towels all over my lap, hoping to draw out the worst of it before I have to go and walk around. On the plus side it's a saturday which means very few people that I know are here, and all of them are locked in offices working furiously. On the negative it's a Star Schools day, which means that half the country's high-school students are milling around campus right now. I think I'll go and have a cup of tea and sit by the heater. 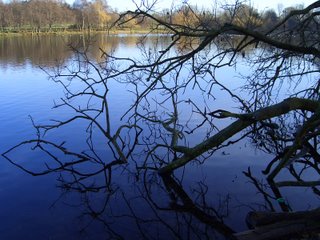 Here's a picture also from Wollaton Park. I went a bit nuts in the uk because we don't really get big trees here (I'd explain why but I've given up ecology. It's a bad habit). So I have a lot of tree photos.