I'm glad I'm not getting married

I was planning on working on my writeup this afternoon, but it didn't happen. First ALL the roads were blocked off on my way home, so I took the highway again and ended up getting off an exit too early and stuck in terrible traffic in small roads because all the big ones were closed. The highway was definately easier the second time.

Anyway when I got home I found out that my brother was actually here, which is very unusual, in the 6 weeks he's been engaged I think I've seen him twice. His fiance was also here, which is nice, necause I really like her and we get along well, but also awkward. Ever since the nice-but-awkward lunch the two of them have been arguing about wedding plans. I'm beginning to understand why Claire and Darryl got a wedding planner. Basically they've had a 3 hour long fight about how long the photo session at the church before going to the reception will take. My brither wants half and hour, his fiance wants it to take as long as it takes, with a ceiling at 2 hours. Personally I'd rather have a quick session because I'ma bridesmaid and I can only smile for so long, but I'm happy to do whatever they want because it's their day. anybody reading this with extensive wedding experience? Any input much appreciated!

So I felt really awkward sitting listening to them fight, so I took my birds out and let them run around my room while I slept, taking only a quick break while my brother was out the next room to try calm down the fiance. Apparently the bridesmaids dresses are to be a dark wine-red, each in a different design according to what we want. I like it already!

So anyway I'm about 6 weeks past the deadlines I set myself for my writeup and a week behind what my friend's supervisor set him as a deadline (I'm using it as a guideline) which is worrying. My supervisor is awesome but a bit too relaxed at times. Did I mention he's leaving for a month next week and he didn't even tell me?

I'm off to church now, at least it's less awkard than sitting here!

This is Amber, the youngest of the chimps at the zoo. She's really cute! I won't mention the log-licking incident here though! 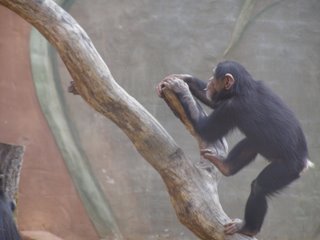