I was listening to Ben Folds this morning, he wrote the music for the movie "Over the hedge" Which I thought was one of the best animated movies since "Finding Nemo."

Anyway my friend Luke had one of his CDs so I borrowed it and I've been listening to it in my car. Anyway there's this one song where he talks about a girlfriend who is completely paranoid (If you can't trust then you cna't be trusted) and it got me thinking. I remember hearing someone talk about psychology, and I think it's Freud who said that what you hate most about others is actually what you hate the most about yourself.

It really upset me, because I always thought that what I dislike about people (being rude, irresponsible, disorganised (although I knew I fit that category pretty well), inconsiderate and so on) is what I always try so hard to avoid. I know I get cranky when I'm stressed and then I can be a bit abrupt, but otherwise I try really hard to be nice to people. The stuff that I know I have a problem with (absolutly no tact, being supersensitive sometimes, messiness and gossiping for instance) I try and give people some leeway because I know I do it too. But why do really bad/aggressive drivers annoy me so much when I'm supercautious to the extent of being paranoid? I guess most of Freud can be taken with a pinch of salt though, he definately had some parent issues...

Anyway I haven't been blogging because I'm starting to panic about the nearness of the end of the year and I'm nowhere near where I need to be with anything. I've been working hard, but a lot of the last few months has been me working like crazy and not getting anything done, so I have to pick up about 3 months of slack. It's pretty scary! I was also just about to blog on thursday nioght when a really good friend of mine who emigrated years and years ago logged into messenger. So I figured that priorities had to be shifted!

Which is why I got to university at 8am on a Saturday. That and some people without building access need to get in later so I said I'd be here. The game plan is: watch some more experiment videos, check out the little guys in experiments, watch more footage, hopefully capture all the data, go home and get lunch, go to work, get home from work, collapse.

A lot of people seem to think it's impossible to be doing a postgraduate degree and still work part-time. I just find that I really need the petrol-money and I enjoy doing something that isn't studying! Plus I get free movies and the chance to hang out with some really good friends and get paid for it.

Anyway I'm going to make myself some strong coffee and get to work. Sorry this post has been so unfoccussed, I'm not thinking too well at the moment.

Picture of the day: 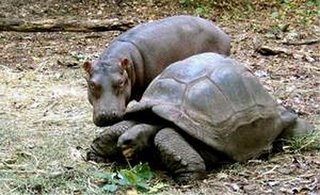 I got a whole email about a week into April with this whole story about a tortoise adopting a pygmy hippo. According to a whole bunch of people it was an April fools day joke that someone hadn't caught on to and had sent it around after the first of April was well and truly over. I'm not sure because the person who sent it to me thinks it's true. Anyone know anything about it?

i get what you're saying about studying and part time jobs, i always find i need something to distract me and make me feel like i am doing something different and thus avoid becoming monotonous!

but somethimes all i wanna do is watch grey's anatomy and then sleep.