Today was pretty much a write-off as far as work goes. I got in early, and spent pretty much the entire morning and part of the afteroon feeding lizards and cleaning tanks. Tas and I had another bitching session and I'm beginning to worry about her, she's a lot more stressed out than usual. She's really awesome though, she has a way of listening to your problems and then getting really angry and yelling at the world on your behalf. Occasionally I tell her something and she gets all angry and yells at me because I think she just gets angry and whoever it is isn't there (displacement behaviour?)...

In the afteroon I kind of arbed around, doing a bit of stats but not really anything significant (no pun intended). I had to go to the optometrist, mainly because I'm on my last pair of contact lenses and partly because I haven't had my eyes tested in a while and I've been getting headaches.

So I did a multiple regression quickly (why? because I can!) and it didn't work :( so I rushed off to the optometrist and was late because I got stuck behind a stupid cement truck that cut me off and then proceeded to go along the road at 10km/hr while nobody else had a problem, because up north everyone else drives Porsches and they aren't afraid of the right hand lane, whereas good people like me who keep left get stuck behind all the slow moving traffic (which is pretty abundant considering just anout everyone is either building or moving at the moment for some reason). On the way I stopped at a robot and called the optometrist. It went something like this:

them:"Thank you for calling Eagle Vision, how may I help you."
me: "Hi, ihave an appointment at 4pm and I'm afraid I may be a bit late, is that all right?"
them: "Ok!" and hung up.

So anyway after handling parking and fending off car wash people and car guards (when we already pay for parking...) and dashing around the centre avoiding incredibly slow people in designer shoes (connection?) I bolted into the optometrist and introduced myself to a receptionist I didn't recognise (I don't handle change well!) and she yelled out "Jaco! Your 4 oclock!"

And a complete stranger walked up and glanced at his watch and made a snide comment about how lucky I was he was free after my appointment and she leapt to my defense and said I'd called. And he snorted and did the whole "follow me" thing and stalked off while I was running through those anti-thesft barriers and around counters and things trying to keep up.

Let me explain. My optometrist has been , for the last 6 years or so, a really weird Croatian guy with way too many consonants in his surname. He's also really nice, actually talks to me and is really good at his job. When I called to make an appointment they said he'd be in so I was expecting this guy to appear and everythig would be ok, (new receptionist aside). Instead I got a weird Afrikaans guy with a comb-over who either snorted or yawned the whole time.

He was so horrible! Firstly he did all the measurements at a set of machines and instead of letting me hold my glasses he forced me to put them down. Then to go to the room for the rest of the test he took my glasses and let me stumble around blindly. It was so rude! You do NOT force a total control freak like me into an unfamiliar situation and then take their eyesight away, It's cruel! After that, he had the weird swinging-mask thingy they use to slot all the lenses in and make adjustments and stuff over my face,and between section, whenever he didn't want me to do anything he put the opaque lenses over BOTH eyes (they usually use them to work on each eye independedntly) so I just had to sit there blindly.

He also never gave me different letters to work with (it's been 12 years, i can recite the charts for you,so please don't insult me with LCNK and RKBD over and over!).

Anyway it turns out my left eye needs a stronger contact lens, so hopefully the headaches will stop.

He also said I should use my glasses for computer work, but my glasses are too strong and I'll get headaches. The gist of his argument was: When you work at a computer you strain your eyes. Also because you are concentrating on the screen you don't blink enough and it dries your eyes out. Because my lenses are quite strong, to use a computer I'd have to sit really close to it which is bad. He repeated this over and over and then said: 'but some people are fine wearing contacts while they work on computers!'

So it looks like I might need reading glasses to correct my contact lenses when I'm reading or typing a lot. I gave up and went to buy iguana food.

Now that that's out of my system I can concentrate on stats!

Anyway I just a had a church group at my house. it really annoys me that they take over my house every Wednesday night. We've all started referring to them as "The Christians" in a mildly derogatory manner. It's not that I don't like the church. And my faith is very important to me. I just don't like Christians very much. It's complicated. anway I abandoned them so i could do some stats(I'm up to page 30 now!).

Tomorrow I have to do a loglinear model (Luke, I need help!) or maybe a logistic regression, although Laura was really wanting me to do a multiple regression with indicator variables. and my huge big repeated measures ANOVA. I also want to break it down and look at interactions between some colours (like chest and stomach, if one gets brighter does the other one get darker?). After all that I think my stats project will be finished!

So far I've done chemical trials and visual trial weights. and in all the millions of tests I only have one significant difference and it's irrelevant :(

So right now I'm going to organise the data so that all I have to do tomorrow is copy and paste.

This is the grown-up Jesse attacking Max. She does that a lot. 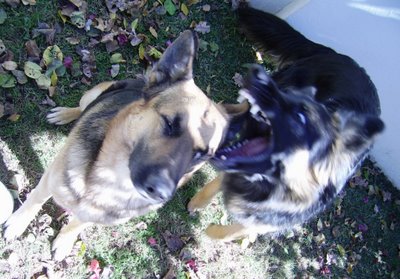 i haaaate optometrists!
they give you all those tests and i'm always afraid that if i give one incorrect answer then my glasses will be too strong or too weak and it'll all be my own fault!

i didnt know you wore contacts! wow! we could start a club!

and i feel ya Hels, i haaaaate it when people change stuff without even consulting me. its rude!