I'm saying this because he just gave me 2 cds with about 800 journal articles on them. I'm really battling to find articles for my lit review for my thesis so it's a very very welcome addition to my camputer! Some of the other people in the snake lab also said I can use the updated database in their lab anytime and search on their special search engine type thing. I love the snake lab people!

It's days like today that I really notice how lonely it gets in this lab. I love it, but I've also been the sole occupant for most of the year, and when there are people it's generally either Trevor (who works like a maniac) or the Australian who was here for about 2 days. Or my supervisor when he can't find something (in which case I generally either mention the fact that we never had whatever it is, or else find it for him).

Down in the snake lab there are a lot of people who hang out there all the time and when they find articles they put it into a huge database that anyone can access. The senior postgrads help the junior postgrads who help the overenthusiastic undergrads. It's so cool!

Here it's just me and the iguana (shout out to Melville!) and very occasionally the freakishly underenthusiastic undergrad who will probably end up being the freakishly unenthusiastic honours student here next year. Just a note: she doesn't get my desk! Even if I go overseas it's MINE until I get back.

Anyway yesterday was a rather bizarre day. We did a lot of admin without actually getting it done. Then I fed animals and had a bitching session about the animal unit with Tas, a PhD student who fights with the animal unit people more than I do. I think it's because she fights back. I try, but I'm always sared they'll revoke my ethical clearance.

I also found out that they're going to euthenase one of my lizards. It's a female, so it doesn't affect me in terms of research, but I have got to know all of them this year and it really does hurt me when I have to say goodbye (insert sob and tear). I understand that she's really sick and pretty old and probably in a lot of pain.

In the afternoon we all got crazy and giggly and it was a lot of fun until Luke went home and I actually got some work done.

Today I've been pretty unproductive. We had a meeting about our next phase of Ecophys, which sounds awesome because it's focussing on deserts which means that a) we get to look at lizards and snakes a lot and b) I'm fascinated by deserts and determined to go to one at the end of the year, whether by means of catching mole-rats or merely dragging my brother with me and making my own way (the brother is due to the fact that my mother is paranoid). So we get to learn about it before we go!

Anyone interested in planning a holiday in Namibia in December?

I also had to email my supervisor and tell him about the missing lizard, which was a scary thing to do. I hope he doesn't get angry, and if he does I hope he gets it out of his system before he comes back here.

I also had to show someone from the animal unit how the lizards on the roof are housed. Then the biocontrol people locked us on the roof (again) and Luke had to come rescue us.

On the plus side I can almost move my finger again!

Also: for the Yebo Gogga thing we're in charge of 2 students who are going to plan the stall with the mole-rats. They were supposed to meet with us yesterday and didn't show up. So they ended up asking for us at the IT guy's office. Today they came looking for me in the snake lab. Fortunately I was there at the time and managed to organise a meeting. They came a few hours ago and talked to Luke and myself. Basically they're disorganised and not very enthusiastic and/or bright. I'm a bit worried about leaving them in charge of animals on loan from another university, but I'm also pretty sure that we stressed pretty firmly that they can't touch the animals or leave them unattended.

They also know absolutely nothing about mole-rats. Unfortunately I'm way too busy to babysit them, so I told them to do some reading and Luke did the same and hopefully they'll cope. If not... I don't even want to think about it.

I guess I was probably the same. I started this year knowing very little about lizards and completely clueless as to how to look after them, handle them, even weight and measure them. Maybe that's how my supervisor felt about me. and besides number 7 I've done an ok job so far.

Anyway I need to do more stats. I just had coffee so I have about 2 hours of excellent work ethic before I get dizzy and nearly pass out. 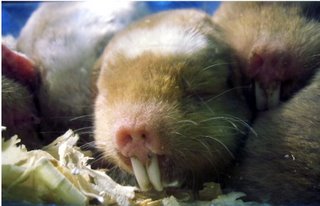 This is a mole-rat. More accurately this is a heap of mole-rats. they're so cute in the way they all pile up and go to sleep! these guys are Cryptomys damarensus which are quite large and relatively docile compared to the Cryptomys hottentotus ones who are really agressive, quite small and make really cute squeak/grunt noises when they're angry.

I'm sure that all that emphasis that we placed on those undergrads to look after the mole-rats will pay off...

I need some help from you but I'll speak to you in person.

hmmmm... namibia.... i love the skeleton coast, but namibs is sooo hot! geez, i mean its better than mocambique, but its still as hot as anything!

i was thinking more along the lines of zanzibar! or a nice cool mountain resort where we can ride horses and read books and not hv to look @ a million gazillion tourists (as would be the case @ the coast)

ps i'm very sad about thailand. its exciting, but i hate it when people use tanks for no good reason. i mean have a coup in darfur! or tibet! or somewhere with human rights issues or something that actually needs change! c'mon angry rebels! get your priorities straight!