So Tai Chi was totally awesome as usual again last night! I may have scared the teacher a bit because he asked me after class if I was enjoying Tai Chi and I think my enthusiasm may have scared him slightly...

Anyway after making walking a little bit more complicated we finally learned some new steps because one of the beginner guys did something I can't pronounce that included aspects of Tai Chi and so he was getting bored and asked the teacher and i joined in. I can't remember past the first two steps but it was fun after doing the same 5 or so for a week...
The other interesting part was watching the teacher prioritising students. Prioritising is a bad word for it, but basically he would ignore the people who were there for the first time (I sidestepped this issue during my first lesson by asking questions ALL the time!) or the people who weren't trying too hard. So basically the people next to me were doing things upside down or backwards or missing steps entirely and he let it slide, and just told them to make sure they were expressing themselves and to try and 'feel the energy' and other abstract concepts.
The new guy who is totally better than me was picked on for not making his stance stable enough (I was picked on for that as well, but not as much) and I was corrected for the tiniest things like how I held my head or if my hands were too far apart or if my toes pointed in or not. This suited me well because I'm really loving the way that it's slow enough for me to really concentrate on getting each step right.
Anyway the whole point was, when we were walking I was stopped because whenever I balanced on y left leg and then stepped out with my right, he could hear my right foot landing. One a wooden floor! bearing in mind that the stance is something like this: (you start on the back foot and step out transferring your weight to the front foot once it's in position)

Do you see why he might hear something when i put my foot down (and said foot is wearing running shoes with thick soles which doesn't help I don't think).

As it happens when I start on my right foot there's no problem, so basically my left leg isn't strong enough to control my entire body, complete with shifting centre of gravity until I'm ready to stand on my right leg. Weird.

So now I spend many hours doing this:

As long as I dont end up like this guy from Lady in the Water...

On the plus side I wore my new black and pink boots today and everyone has loved them! And according to one of the masters students I was speaking to this smorning, gravitating to pink things is a sign of change. And I think change is a good thing! 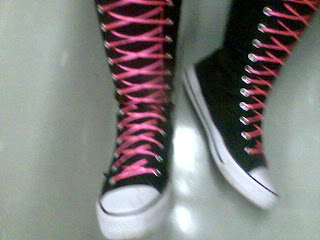 Here's a photo from my phone because I'm too lazy to find a real camera and I know that if I dont post a picture I may be lynched!

Tai Chi can be totally relaxing. I've done Tae Kwon Do, Ryuku Kempo Karate and dabbled in many others ever since I was a kid. It's really hard for me to find someone around these parts anymore that meet my standards for instructors though. Just because they know the stuff doesn't mean they can teach it and undertand it as an art form. Most of the people around here you can just by your way through the classes. I'm glad you're enjoying it so much.

I totally forgot about that dude in Lady in the Water...I really like that movie!

And the shoes are awesome!! Love the pink!

What is wrong with ending up like that guy in Lady in the Water? SEriously I wish I had strong arms like that, with my girl's body, imagine the things I could climb! Sure I would look like a freak but that is what long sleeves are for :)

I noticed my right arm is stronger from playing squash. wonder if there is some sort of balancing out trick like that flamingo stance you do (for arms?).
Also I tried playing squash with my left arm, I get creamed every time (as opposed to 90% of the time with my right arm).

Anyways I think your boots is ugly (but I have bad taste and HATE pink...so don't take offence or anything). I did like the nightmare before xmas earings from a previous post though...

Hi Helen, lovely boots ;)Nothing wrong with pink, I thing recently I'm overusing it a bit too, but I feel good wearing it, it's probably summer's fault :D. It is great you are so much into Tai Chi, if one wants to do things right - lots of dedication is needed ;) As for me I'm back from holidays now, and hopefully will be posting more often - come to visit! ;)Cheers

GREAT BOOTS! Oh and it wouldn't be the sound of my feet I'd be worried about in Tai Chi classes, it would be the inevitable fart that would pop out during the silence.....

Suvvygirl: I'm not good enough to notice if a teacher is useless or not, but I'm pretty happy with mine so far!

Po: That guy only worked out one side of his body, so one arm was huge, the other was all weak and spindly... not so cool.

EEbEE: that's just because you don't appreciate the coolness of pink. I tried squash once, it didn't work out well.

Olga: thanks! I'm so jealous you get to have Summer right now! We're all freezing here and it's really not fun!

Kath: uh... can't really answer that one... good to see you're back though!