I'm afraid I've been a bit slack in concluding the super-awesome Name That Cactus Competition. Priorities start shifting when begging for large amounts of money become the main focus of the entire lab (fingers crossed that we get it!). Anyway, as I'm sure you can see from the poll on the right, by a totally democratic process, the cactus has been named Norbert! And just in case you didn't believe that we would follow through: 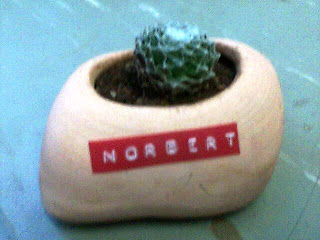 He's been tagged and everything!
Special mention goes to Hannah and Henno for their choices of Reuben McGarrige and Gulliver respectively. It was pretty close!
Of course, the glory all goes to Po, for suggesting the winning name, and as such we must give her TEN POINTS and of course discuss her awesomeness!
I will not mention the awesomeness until I've got the others locked into the lab with me (the weird thing about postgrads is that you mention 'writing' and they vanish and you have to coax them out from under their beds with donut crumbs and the promise of free food... It's almost as bad as the postgrad reaction to words like 'statistics'; 'graduate' and 'what will you do when you've finished?') although I don't think it'll be that difficult!
In the meantime, as promised, Po, I give you TEN POINTS and a group hug: 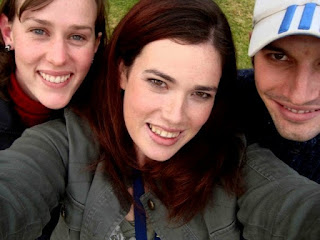 We couldn't find a photo of Po, so you'll have to use your imagination!

I am hoping general points of awesomeness that go on my universal list of pointy awesomeness??

universal points of awesomeness! Don't lose them, they're quite valuable!

Yay! Norbert is an excellent name (although I'm hoping the next plant will be named Elton John)! Well done Po!

You guys are all pretty good looking by the way, as scientists always are :)

hello norbert nice to meet you!

helen you look so good in that picture!

luke you look scary and dark. as usual.

Norbert - cute! If I'd been around to vote, that's what I would have chosen too!

Norrrberrrt; sounds best when you talk like Hagrid from Harry Potter.

Candice: I wasn't sure who to give photo-credits to, considering I took that one, but it was on your camera and you uploaded it... I figured I could take a liberty in exchange for it being the cover of your album on facebook...

Po: thanks! We are trying to destroy the stereotype of scientist being pasty-whihte and afraid of sunlight while hiding in the lab to avoid human contact... Oh. Never mind!

Sarah: Thank you! I sent you postcards yesterday so let me know when you get them! The stamp covered your name on the address, so you might have to wrestle for them...

Kath: sorry you missed it, but from the sounds of it, your holiday was worth missing a little cactus-naming contest!

Hannah: We didnt actually make the Harry Potter connection until a few hours before the poll closed! Scary, I know!

Is that you, Helen? You're gorgeous!

You guys are pretty good with names. I liked them all to be honest.

Perhaps you could help me name my new puppy.

It's a Basset Hound, a male and currently nameless.

Also I refuse to call it Fred...