Thanks so much those of you who've voted to name the cactus! Please keep voting, the poll is up until Friday!

So anyway after an awesome weekend of braaing, doing yoga on a wiii (videos might follow but I'm not sure how keen the people are to have their hula-hooping broadcast, and it's one of those 'you-had-to-be-there clips), being attacked by a lamp with a necklace doing an impression of a wind-chime at the same time, and spending an awesome evening playing Guitar Hero World tour (that's the one with the microphone and the drums and the two guitars and you play in a band!) after I was invited by telepathy and then yelled at for not RSVPing...

For the record, I really really really want to learn to pay the drums now! It was so much fun! And anyone near me got whacked by my flying drumsticks, so be warned... And of course when I mentioned the yoga to my boss on Saturday he and I ended up practising our yoga stances in the waiting room, between clients! It was bizarre!

Anyway it was also a bit of a weekend to be girly for me. I spent a long time having a chat with Chief-Goth, who's not very happy at the moment, and she's decided to do Pilates with me, so I'm hoping that'll happen. As much as I like gym as 'me' time, I want her to feel better more.

I also got these awesome earrings: 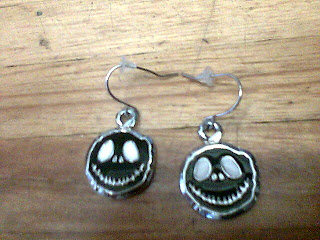 some awesome legwarmers (they're grey and black and I love them! and a pair of Converse-style canvas boots that are pink and black and lace up to just below the knee (hence the legwarmers, having boots on without tights or something makes me feel like I'm wearing shoes with no socks and that's disgusting!) and an amazing shirt that's made out of something called Lenzing-Modal or something, but basically it's made out of cellulose from beech trees! It's really comfortable and it'll be suitable for the goth metal music festival I'm going to in a few weeks!

The boots are amazing, except that I have to lace them up pretty tightly to get the laces the whole way to the top, so I went hunting for shoelaces and ended up buying these ribbons instead: 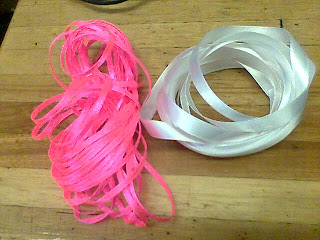 The laces are white at the moment and I love the look but the super-neon pink (it's brighter than it looks here) is amazing too, so I'm going to have to go home and try it out!

Anyway, after all that, and a relatively quiet Monday, Leia and I went shopping this morning. I've been promising to take her make-up shopping for months and we finally diarised it and went, although it was a bit 11th hour because her car isn't too reliable and I thought I might have to dash off somewhere else halfway through the morning, but as it happens, we made it, albeit about an hour late because I had managed to lose my car keys.


After only a brief stop at Rage and Aldo (who had the most awesome shoes but not in my size, the joy of it being on sale and therefore the last pair) I delivered her to Lizzy, the amazing person at Bobbi Brown. Lizzy recognised me! How scary? I introduced her (as she was kind of sputtering - Leia, not Lizzy) as my friend who needed help, and so Leia sat for about half an hour having her makeup done while Lizzy explained what everything was and how to use it. The only awkward part was when I was bouncing around (I ran off to check out MAC a few times, as well as looking around Red Earth which looked like there had been a tornado through the aisle) she gave us both a lecture on using black eyeliner and black mascara. For the record, my hair is super-dark brown and as much as I like brown eyeliner, it's too much effort maintaining two sets of everything, particularly when mascara goes funny after three months anyway! She also told me that as my eyebrows are basically black and my hair is brown I should TINT my eyebrows to match my hair to match my eyeliner. uh, how about NO?

Anyway after all that she sat me down and did my eye-makeup which was awesome! and of course resulted in me splurging on this:

And we also promised to go through on Saturday when they have a visiting international makeup artist visiting. I'm not sure what to expect, but she said we'd enjoy it and we'd have our makeup done again. I can never say no to free pamperage...

After all that, Leia looked vaguely shell-shocked but also decided that she wanted to check out a dress, so we ended up trying on outfits for a while. I liked a lot of stuff, but I have learned to go away and think for a day or two before committing to clothes, in an effort to avoid my cupboard filling up until the shelves collapse. She got herself a LBD and I was very proud!

I made it up to myself by going past my favourite accessories place and getting these: 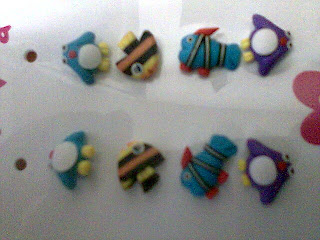 I totally fell in love with the penguins! They also came with these: 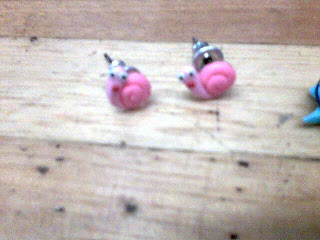 Sorry for the fuzzy photo, they're tiny! And also perfect for teaching the snail dissection! And these: 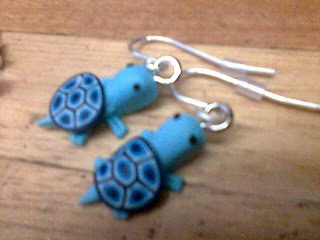 Anyway after all that I'm totally girlied-out and I feel the need to play paintball or climb rocks or go quad-biking or something. Not that it wasn't awesome fun though!

And it's Tai-Chi tonight! I'm SO excited!

Labels: friends, fun, I am female

your converse-style boots sound so cute.

Love the nightmare before christmas-like earrings.

I love those turtles!

I have never been to one of those makeup people in my life, I am too scared, cos I am clueless and have no idea how to do makeup. I need someone to go with me!

Oh, and take it from me, black eyeliner and black mascara is just fine, in fact for maximum effect its the only way to go. When was the last time you saw a cosmetics ad that didn't have black-on-black for the eyes?

Oh, and yeah, swing us a pic of the new shoes with the hyper-pink laces so I can be truly envious!

i WANt to do yoga!

how cool are you ,hels

and i love how naturey all your stuff is :)

Oh, these earring as so very very cute! I used to have similar ones with cow face on them :D but they fell apart so fast :(