I was tagged by the lovely Suvvygirl from Tales and Adventures of Suvvyland for yet another meme!
The basic idea is to pick 6 unimportant things that you love. So here goes:
1. ice-skating

I did ice-skating when I was in high-school, mainly because I was good at it (years of falling off my Rollerblades had got my balance issues sorted out) and I loved it! I was just starting the advanced/freestyle class when I took a break to write my exams when I was 16 and never went back. I still go to the local rink occasionally (there's one nearby now, I used to have to go out to krugersdorp ever Saturday. I can't do much anymore besides go forwards and backwards and the odd little step I sued to do, but I still love skating around and around, not doing anything special, and just letting my mind empty and relax. 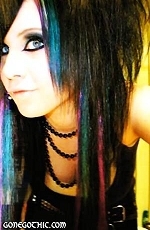 This is not me although I would love pink AND blue hair! The picture is from here (along with an awesome guide to emo makeup that ends with advice to keep it light to avoid 'looking like a poser' I think the emo community would be quite annoyed to find out how adorable i find them! In a cute puppy kind of way...)

For some reason, around the same time as I figured out how to wield a hairdryer, I figured out that eyeliner isn't all that difficult, and since then I find it difficult to leave the house without it. It's a bit like mascara or lip-gloss - makes you feel pretty instantly! Gosh I such a girl!

3. hanging around at a friend's house on a Friday night watching bad movies or playing guitar hero or just plain hanging out and talking nonsense...

I adore guitar hero as well, although the random character selection seems to be biased to picking the one we've officially (and not very affectionately named 'that skanky blonde one' or the KISS guy. I like this one: purple hair AND awesome socks! Winner!

4. Bad horror movies. I fin most horror movies hilarious, the more B-grade the better, although I actually went and saw Drag Me to Hell twice because it made me laugh so much! Other favourites include The Cave (where we've names each set as a different level so changing scenes you have to yell "Level up... it's the Aztec Level!!!" And of course if someone dies you have to make the appropriate "Game over" noises. The Descent (which has t be watched right after the Cave for full effect). Mirrors, the Fog, House of Wax (just to see the oh-so-famous death scene), Dark Water and that sort of thing. 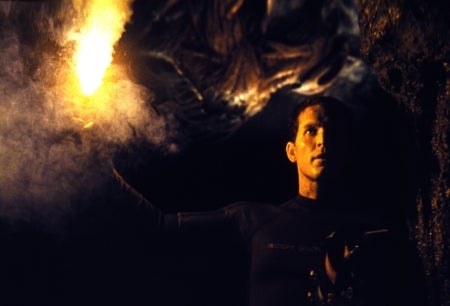 5. Exercise. now that it's so flipping cold the only way I can feel that my feet are still attached to my legs is by warming up by exercising. I've been going to the gym since last March, but regularly since about November and I'm loving the way I'm sleeping better, feeling more awake during the day and just generally enjoying feeling vaguely healthy. I went to my first ever Pilates session today and it was a lot of fun! Way better than that yoga-tastrophe a few months ago!

6. My big puffy winter coat! It doesn't get cold enough for me to wear it often, but right now I'm all bundled up and cozy!

I'm supposed to be tagging people, but I'd rather they chose to do it... so if you want to write about 6 unimportant but oh-so awesome thing the please do! Just let me know so I can link to you!

I've never done ice skating but assume I would injure myself and horror movies themselves dont scare me but the thought that someone who thought every demented thing in the movie up is walking around free somewhere. :P I like meme's like this, learning the simple things about people is always the best!!

can you teach me when i come home?