I'm still waiting for my stats assignment. Today I sat at wits for almost the whole day checking my email every 5 minutes. nothing. it was PROMISED by this morning and now it's 10pm and nothing. Even my supervisor said she's being unreasonable (and from someone who hates marking more than anyone else I know - me included - that's impressive).

I cleared out my desk in the lab today. It was mostly stuff to throw away, but I felt really sad carrying little piles of things next door to add to the general pile of clutter in the honours room. The lab in uninhabited now, except for Melville, who didn't really seem all that sad about it (I bet she's hiding opposable thumbs and she's sneaked out of her tank to have a party with the cockroaches as we speak. and clawing a voodoo doll of me.

We all just drifted aorund all day. I had a reasonably ok conversation with my supervisor (it was awkward, but less than usual). EEbEE and I also had ice-cream and burgers next to the pool, sitting on the steps (don't get closer to nature than you have to, it's dangerous), watching all the old men in their old wrinkly speedos (EWWW!) there was one guy sunbathing with one leg up... (I'm scarred) and another who had SUCH a hairy back it looked like he'd strapped a doormat on like a supervillain cape (hero just doesn't fit there). there's also a promotion with ice-tea at the moment where you can win stuff. I won a towel last week, so I tried again today, but all I won was more tea (and it tastes pretty bad).

After all that I went to work where it was the busiest weekday shifft in a long time. I was working all alone too, so it was quite stressful. Lets just say that in the 5 hours I worked I made twice as much as what we usually make in an 11 hour day. Inbetween runing around like a maniac (or a blue-assed fly, my new phrase for the day!), I watched "The Lake House" with Sandra Bullock and Keanu Reeves. Usually I work with guys, so it's always a big debate over what to watch. I was watching Prison Break, but the DVD drive on the computer was giving trouble and we're not allowed to put stuff above PG on the TV. Plus I felt like a nice girly movie for once. It was cute. Slow moving and predictable, but it had its moments.

Right now I'm going to go and find a nice book (I don't know what, I've read everything I own about a million times) and fall asleep over it. Sounds like a plan.

I took some pictures of the honours room today. My desk has been tidies recently, it's probably the tidiest it's been in months. 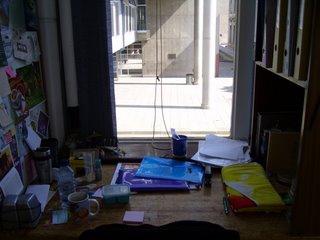 This is my desk (aka home for the last 10 months). It's a lot bigger than it looks here. 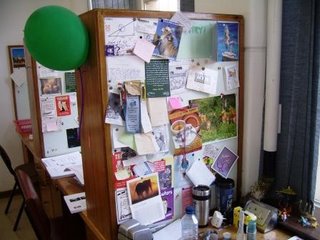 This (right) is my pinboard, where I basically organise my life. I have a lot going on. I don't know what I'm going to do without it! 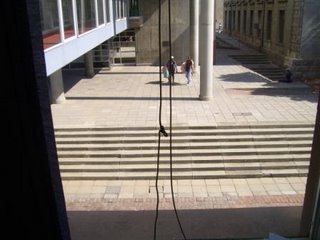 This is the view from my window. Ther are almost always (just not today) hordes of students down there who have no idea that I'm watching them (and Luke's stalker who knows very well where we are...). 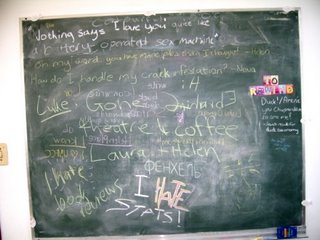 And this is the blackboard where we have had many lively intellectual debates (such as... I don't remember. There was one about how we're unconscious of our fitness becasue otherwise there would be hge queues ofr sperm banks. And other stuff that I can't remember. I wish I'd written it all down!) as well as hundreds of inane discussions, like whether we write our 'O' clockwise or not. and the betting pool was organised on it. Roight now it's covered by Sarah's pretty cool demonstration of mirror writing (she can write backwards REALLy quickly) and a few quotes that I mentioned before. The resolution isn't great here, on the original photo you canactually read all thw writing :(

Helen! The photos are awesome! Did you happen to take on of my desk? Can I get them all from you?

I'm also waiting for my stats and it's 11:freaking15! I'm going to bed now because I'm sick of waiting and I have to take my mother to work tomorrow :(