We played paintball yesterday, I've never played before... It was a lot of fun, but today has been a really bad payback. I HURT.

Fortunately I was wearing a vest-style thing that covered my chest and my back, because I got shot in the back a lot, but didn't get any bruises. I was convinced that I'd be shot (and so out of the game) in the first 2 seconds, but I was actually one of the last of my team to be annihilated, when I took a shot to the shoulder. My shoulder is purple now. A bit later we played with all the girls (12) against all the guys (14). After a few minutes it was just me, with about 5 or 6 guys circling me. I held out pretty well, but then Oliver got behind me and shot me in the back.

Mostly I kind of found a safe spot and hid there, shooting at anyone I could see. the problem was that we were wearing red overallys, and the teams were marked with red and white armbands, and nobody really shows off their arms while you're fighting, so i had a bit of an embarassing moment where I shot at a teammate for half a game.

There was also a game when we all ran for cover and Oliver kept running and got behind us and shot our whole team in about 30 seconds.

Mostly it was one shot and you were out, but the last game, which was the best, was when we were trying to take people's flags, so if you got shot you just went back to the start. It was the first gamer when I didn't camp out somewhere, and it was so much fun! I only got shot once, in the neck (no bruise though), and I got pretty far through the course when I ran out of paintballs so I had to leave. I got shot on my way out, which I was quite annoyed about!

Anyway, I woke up today in a lot of pain! It's not so much the bruses, which are pretty minor, except the one on my shoulder. It's the fact that I've been sitting behind a computer for the most part of the last 6 months, so crouching and running around literally all day so my leg muscles are really really stiff. I'm sure the wits people will appreciate the walk up the hill this morning!

I went in to pack up my desk in the honours room. It wasn't really sad, mostly I just threw a lot of stuff away. I cleaned out my drawers and my cupboard. the sad thing will be emptying my pinboard. As the hill is so horrible I refuse to do more than one trip to my car a day, so it'll have to wait until monday. My supervisor said I can store stuff in the lab until I get back in January, so at least I only have to take what I can carry. He also said that he won't write my letter of recommendation for a scholarship until next week, because he 'has a feeling' that I'll be one of the top people and he wants to put that in for me. Apparently our marks are all finalised (as in set in stone) by wednesday, and he'll know by then. I was tempted to ask him to sms it all to me in the desert, but instead I said I don't want to know what I got.

I really want to know what I got.

Here is a picture of Luke and me before the first fight. I'm wearing the mask, I'm not sure why. those things were so hot, it was TERRIBLE! 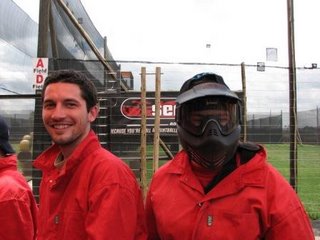 I totally want to go do that all again!

I'm glad it was the first of the ANNUAL paintball matches! Hooray! We get to do it again next year!

we must CLEAN OUT OUR DESKS??

ok ... that's something i've 'conveniently' forgotten to do ;)

I've cleared out mine...it is a sad and sobering experience.

But we get a fresh one next year! Yay!