How exactly do you defog a wondshield when it keeps fogging up and you think you're going to die?

There was a STORM today. it was really scary. Basically after realising that work was not going to be happening at wits today, we went for lunch at a really nice Italian place that let us sample the ice-cream. It was really nice, but so was the pizza until we skipped dessert anyway. I'm leaving out the way that people drove like idiots and I couldn't find parking and some idiot parked her car in the middle of the road (right next to a million empty spots) and smoeone was standing in the middle of the other side of the road talking to someone n the back seat and the some poor guy walked slowly and I yelled at him and felt better. That's one sentence because that's exactly how I said it.

Anyway when we left the restaurant I noticed that on one side the sky was blue (up North, where my huse and work is etc) and on the other side (where wits is) the sky was dark. So I drove to work, noticing that the dark was catching up to me. By the time I was going past my suburb it felt like about 6-7pm (it was 3:15) and we all had out lights on. So I raced the impending storm to work, ran in and told Joey to go home before it hit. When I walked into the store the sky was blue. I walked out half a minute (literally) it was black, and not more than 10 seconds later it was pouring with rain that turned into hail.

so we sat at work together, drinking hot chocolate from next door (which we have to pay for because we ordered Scooters Pizza on the weekend and now Nico's upset with us). And complaining about how our boss is a moron. James, the guy who caused all the trouble is being fired either today or tomorrow, so it should calm down a bit. it turns out that he was 'away' on the weekend, so the staff at the other branch had to cover for him, meanwhile he was in our branch about 10 times. Jo really wanted to be the one to fire him, but the manager at the other branch had to :( She's scary when she's angry!

Once Jo had left we watched Hoodwinked. It's so cute! There's this one scene where Red meets this crazy goat who has to sing instead of talking. and he has detachable horns, like long curly ones he uses as a ricking chair and can openers and stuff. Here's the song:

To be prepared, to be prepared
And unless you've got a spare
You've got one life so handle it with care
( Keep your hands and feet inside of the vehicle at all times!)

It's so cute! I was laughing and laughing, and Matt, the guy I was working with, was singing along and these little kids were sitting on the carpet giggling. I guess you had to be there.

anyway after work I went to my car to find it was white (my car is generally dark blue), all the rain had turned to frost on my windows. And wiping my windscreen only did a little bit, it kept fogging up. It was really scary. Sometimes having my airconditioning on helped, but I didn't have much petrol (I was meaning to get some on my way home), so I kind of drove at 20km/h putting the aircon on every time I couldn't see anything. fortunately it was quiet and I know the road well, but it was really scary. Especially when I was nearly at the petrol station and left the aircon on, and it seemed to make it worse!

So that was my day... action-packed as usual! Right now I'm having a weird Skype conversation with my aunt in the uk, who keeps confisong me by telling me I should be in bed, and just becasue my email was boring I'm ungrateful because I got to talk to her... I'm too tired for this!

here's a picture: it's Red and the Goat, I got it from some website (i.e. animated people do not walk around to have photos taken by me...) 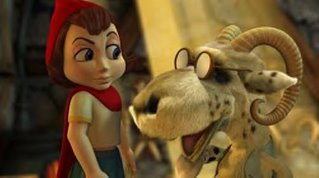 I'm going to bed now, if I can tactfully remove myself from the conversation...

Well Hel's, EEbEE and I got into the bio building back at Wits literally seconds before the hail hit. It was wierd coz usually u get a bit of rain before the hail starts but this time the hail simply came down without introduction. It was really nice though to sit in the Hons room and look out of the window as tiny little white balls bounced around outside.