different ideas of what's going to happen to us

I saw 2 very different movies today. First, after an absolute hell of traffic jams followed by dentist appontments followed by more traffic jams (for a country that used to have daily summer afternoon thunderstorms, our robots completely die after it rains!) and a 20 minute visit to the zoo (I want a sungazer!) and rushing around wits... I went to se An Inconvenient Truth.

It was ok, although a little bit wasted on a bunch of people who studied ecology (and Sarah who is an honourary ecology/zoology person, especially after her essay). It was funny when he'd say stuff like "This information has been seen by only a handful of elite scientists!" and then show us an excerpt from a national geographic graph of the world's most famous climate data. There was also a lot of random stuff about his past and stuff, that was a little bit off-topic. And why were all the flash-backs fuzzy?

i was also irritated by the lack of anything involving the southern hemisphere. I understand that he's American, and Africa hardly exists to them besides as a place to export fruit from, but the way that he'd casually mention catastrophic disasters in Africa or South America or New Guinea, and then go ON and ON about Hurrican Katrina. It reminded me of an essay I wrote about hurricane Katrina in third year. I won't say what I concluded, because any Americans reading this mught lynch me (and just from the record, it was a terrible thing to happen and I'm very sorry for anyone affected).

To illustrate my point, he had a whole long thing about how the ocean currents and wind currents would be affected by melting ice. but he hadn't done his homework, and hadn't switched the directions for the southern hemisphere. so Africa was shown as having a cold current along the east coast and a warm current along the west coast. It's supposed to be the other way around.

Anyway, I did enjoy it, and I'm glad he's raising awaremness, I really hope that something good comes from it, and more people try and change the way we're affecting the world.

After that, an an awesomely delicious lunch at Kuai (I think that's how you spell it. It's a really nice place that makes amazing smoothies. My first boss introduced me to them years ago, they're fantastic! It's amazing how you don't feel nearly as post-prandially dipped after healthy food!) I battled the traffic again to go to work.

At work, we watched a movie called "Ultraviolet" it's a futuristic thing where some people got infected with this virus that makes them totally superhuman but also sick, and the lead character (Violet) is a sick one who fights back, but then decides to protect a little kid who isn't infected. To tell the truth, I really didn't understand what was going on most of the time, but she could change her hair colour all the time and I liked that. It reminded me of how I wanted blue streaks in mine for years until some stupid teenager in a stupid teenager movie had them, so I have to wait. Maybe next year... Anyway the movie was mostly just special effects and trying to put enough storyline in to attach the various fight scenes. In one or two fights it actually looked like they ran out of music, so they just ended very suddenly.

It was a lot of fun though, I enjoyed sitting there with Matt(2) laughing at it and betting on what would happen next. It was also fun seeing the future as not drowning and frying at the same time, but beating the &%$** out of a bunch of bad guys with weird sword thingies. It was also a nice shift because nobody yelled at us. Usually at least one person screams and shouts and walks out because they kept a movie late and think it's our fault. 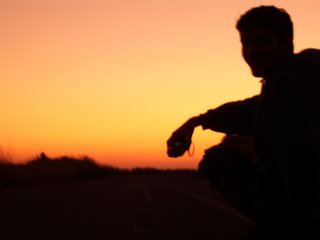 Here's a picture of Luke getting in the way of my sunset picture. totell the truth, I think it's a lot more interesting than ALL the sunset photos I took that night, which look very much the same.

Goodnight everyone (Southern hemisphere particularly, we don't ALL forget it!).

Helen made a minor typo that could potentially confuse a lot of people. In the movie, Al Gore had an animation of the ocean currents. On his one, there was a cold ocean current flowing down the EAST coast of Africa and a warm one flowing up the WEST coast. In reality, it is the total opposite. There are 3 major currents around the southern tip of Africa: The warm Mozambique current which runs south along our eastern side, the cold benguela current that runs northward on our western side and the third Aghulas current which runs in a westward direcion accross the southern bit.

oh no! I'm so sorry! I can't believe I did that! I think it's because I had it beaten into me for so long I just couldn't type it wrong!

i think it's amazing what you know. i'm glad the truth about ocean currents now. and, for the record, you can say anything about america and i'd never, ever lynch you. for reals. cannot speak for the rest of the population, but your words are safe with me.

i honestly think i should read a book on ecology or zoology so that i can understand more of what you're talking about. i feel so lost, but i like what you write.

i like what luke writes too. i've never told him so, but now the truth is out there.

if you want a gentle start, maybe try "Last Chance to See' by douglas Adams. It's not really zoology/ecology, but it gives a good insioght into the passions and efforts of crazy people like us. there are a few other books that are nice and indepth, but I can't think of any right now.

thanks for the Carte Blanche on America, I'll save it for later!