First things first: the people in our lab eat popcorn almost every day. We love it and there's a place on campus that sells it relatively cheaply aand they make it really well as long as you don't look very closely at the oil... So when I was getting quotes for a coffee machine I got one for a popcorn maker as well (an air-popper not needing oil and all that nasty stuff) but we decided against it. Then I saw it on special for next to nothing on the weekend, Leia is super-keen to chip in and get it, Luke not so much...

As the deciding vote I can't make up my mind (no pun intended) so I have put up a poll (top right hand side of this page). Please vote and help me on this! It's not as arduous as commenting (although you are more than welcome to eplain your choice) and is totally naonymous so all you lurker out there are welcome to click a button and make your voice heard, but not identified!

Ok, so to the point of today's post... I got new shoes, and NO I don't feel guilty because they were on sale and therefore better-than-reasonably priced! I actually picked a different pair and was already at the checkout when I saw the shoes that I REALLY wanted, and the long-suffering salesman let me try them on. And what are the chances that the only pair left fitted me? 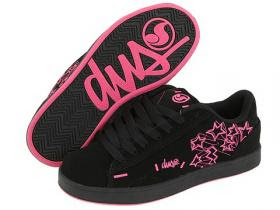 Aren't they awesome? They come with a choice of black and pink laces, so I went with the pink, which make people visibly recoil at their brightness, but I don't really care, I like them! The best part is that I don't have to lace them up, and the padding which makes them super-comfy also makes them really nice and warm! And they match my pink paper-clip earrings!

So the guilt? well today I worked at the vet and from there went to the centre where I used to work to return DVDs that I hadn't got around to watching yet. I figured as I was going to go straight to the lab I'd get spinach and feta pie while I was at it and of course I walked past the hairdresser that I used to go to.

I moved from them to my friend's husband's sister's husband's aunt instead as she's much cheaper and really good and she works from home which is conveniently near to where my friend lives and so she used to come and keep my company while I got my hair done. She was also awesome enough to dye my hair blue and organise blue extensions when that didn't work!

Unfortunately since my last haircut, my friend divorced her husband, which made his family really angry and makes me scared to have Renee anywhere near my head with a pair of scissors. but as it's been a good six months since my last haircut and I'm in desperate need of one I figured I'd make an appointment considering that I'm working less than a kilometre away this week. Renee thinned my hair a lot last time so I've been able to have it loose, but lately that's grown out and it's too thick to do anything, even if I straighten it. and all the layering and stuff has mostly grown out which means it's just...everywhere!

So anyway, back to the guilt, i was on my way to the highway when I saw a woman sitting at the side of the road. She wasn't begging, she was just kind of sitting there. She held a blanket that might ave contained a baby, but I think was actually just strategic padding (I hope so anyway) and just sat, in the sun which was pretty warm right then.

I never give money to beggars, but I often keep food in my car that i hand out, or clothes or something. I've heard the stories of begging being more lucrative than working and all that but at the same time I worry that they're usually told by people who have jobs. At the moment there is NOTHING available, even the government-run companies aren't hiring people (despite dear Jacob promising 500 000 new jobs) and lucrative or not, to cast off your dignity and sit at the side of the road has to be totally soul-destroying. I don't often give stuff away, but I try to make eye contact and say hi and apologise, and just treat people like humans rather than pretending that they don't exist while revving to try and make the light change faster.

but today i didn't have anything, so I figured who was I to have made an expensive hair appointment while this woman was sitting there with nothing. The robot (traffic light) was red so I sat there for a while, until I decided that she could probably get more from my pie than I would and so I opened my window and offered it to her. It was still warm and she seemed really grateful and the light was about to change so I said it was a pleasure and to have a really good day and she went back to her seat.

As I changed to first gear I saw her settle back with bit more gusto than I'd expected, to see that she'd FALLEN down a hole that had obviously been dug to change cables or something for the robot! There was the plastic orange mesh stuff around the perimeter and I think she was using it for shade and it ad given way or something and she literally fell in backwards, head first!

The robot was green and people were hooting and I must admit my first thoughts were of whether I could leave my car, bearing in mind that my laptop was in the boot and that was probably a bad idea as I hadn't backed up this morning's work... so I waited until she stood up and waved that she was okay (although she seemed somewhat wobbly) and I had to go.

I can't believe it happened! And maybe if I hadn't tried to give her a pie she wouldn't have hurt herself!

I mean really, what are the chances of that happening?

And yes, I just wrote a post about homeess people and shoes. I am officially shallow.

You would only be shallow if you had made fun of the lady or didn't care about her at all.

Very cute shoes!! They look like they'd be comfy.

LUKE ISNT KEEN? whats up with THAT, LUKE? good grief. get the popcorn maker. and dont let him eat any of it. mwahahaa

my dreams of quick easy and cheap popcorn were shattered when I found out that flavours like salt/chutney/BBQ/basically anything in powder form just fall off. you can salt for hours and everything just falls to the bottom of the bowl.

I eventually overcame the problem by putting vinegar in a water sprayer and giving the popcorn a good coating before flavouring. but the you popcorn is sour... also vinegar dissolves...popcorn flesh... you have to eat it quickly before all you have are empty seed coats covered in sour salt.

You have been warned.

stick with luke on this one