Of memories and weird dreams

So lately I've been watching the x-files a lot... and it always results in me having weird dreams. Once I got to the end of season 7 I found that season 8 wasn't really grabbing my attention (although the weird dreams got weirder, particularly whenever I fell asleep in front of the tv during an episode, which happened quite often. Considering that the only other option was watching our cricket team skillfully grabbing defeat from the jaws of victory (and that's all I will say about that except that Duminy rocks!) it wasn't too bad.
Then I really got into spending my work-time playing with visual basic and my free time at the gym or doing photography and my dreams returned to normal. Then last night i had the weirdest dreams!
It was like I was a little kid again, and two memories that I had all but forgotten resurfaced: The first was about easter when I was about 8 years old. I found a white t-shirt in my room and started drawing on it with koki-pens. I drew all the Easter-related stuff I could think of: eggs, rabbits, brightly-coloured squiggles and so on. And when my mom caught me she didn't yell at me, as I would expect any parent to do upon catching their offspring drawing on clothes, but rather she gave me a bunch of other pens to use and I completely covered the t-shirt in drawings. On Easter day we went out to the East rand to my grandparents and I wore the t-shirt all day, despite the funny comments from various relatives. The sad part was that when it was washed the bright colours all washed out leaving a tie-dye effect with some of the other drawings staying, so the shirt was pretty much ruined, which i was very sad about. I had hoped it could replace my favourite shirt (which had a plastic face on it that played a song when you pressed the eye, actually my brother and I each had one but we ended up sharing when one of them went through the washing machine and the face came off...).
The other dream also revolved around me destroying clothes... my favourite game as a child was throwing my barbie dolls out my window and waiting for it to rain. Then I would bring them inside, cut my clothes into strips and bandage them up. This really upset my mom, although quite often she would wonder where a specific item of clothing was and then one day she'd go into my room, see brightly-coloured strips of cloth lying around, mentally connect the dots and go "Oh, Helen..." anyway the thing I remembered in my dream was not about any of this, but I felt I must explain the scenario. when I was about 6 I desperately wanted a porcelain doll. My grandmother obliged and for Christmas I got one and named her Lily (yes, really!). She was extra-cool because she wasn't one of those stiff ones that have to go up on stand and you can't play with then, but she was made out of a bean-bag type body, with china arms legs and head. I spend almost every waking minute with the doll, and even got a matching haircut once (it helped that it was identical to my usual haircut, but I took her along to the hairdresser to show him what I wanted. He seemed quite tickled to be taking orders from a 6-year old and even offered to take the hair he'd cut off me to make her a new wig. I refused.). So what the dream was (and this really happened) was one day when I was about 7 or 8 and there was a drought, so none of my barbies were getting 'injured' enough, I decided that Lily needed open-heart surgery and so i took a permanent marker and drew stitches across her stomach.
The weird thing is that I'd completely forgotten about all of these things until I dreamed them! and when I woke up I went into my cupboards, and the doll still has 'stitches'! I will have to got through the photo-albums at some stage and confirm the existence of the amazing Easter t-shirt, but I'm pretty sure that happened too...
I'm sorry to drag on about this, but it's the first time I've ever had a 'real' dream, and definitely the first time a dream has brought back memories that I'd forgotten!
On another note entirely, this is the kitten who is currently sitting at the vet and looking for a home. She's the sweetest cat ever, so if anyone knows anyone who wants a cat and could give her a good home, please let me know! 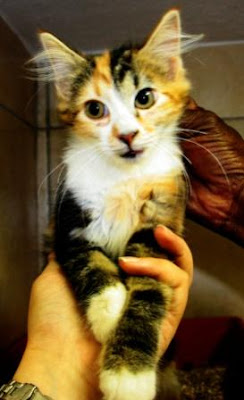 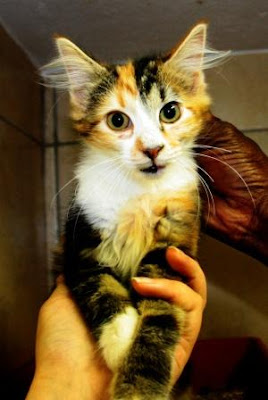 The kitty is so cute!!

That's kinda cool that at least the memories were good ones. I dont' think I"ve ever really had a dream like that. I've dreamt stuff that has happened before but something usually gets changed in teh dream.

Oh my! The kitten is gorgeous! I would take it in an instant were it not for the fact that I'm writing this comment while entertaining the other kitten (and trying to avoid having my ankles attacked by it)!

By the way, were these pics taken on the swanky new SLR? ;)

Your memories are lovely ones and give us readers a clue into the complexities of your mind - after all, why play with Barbies when you can bandage them instead? I never went that far but just rejected them and went for the pens and t-shirt designs like you did.

The kitten is adorable and I hope it finds a loving home soon!