I slept until 8am this morning! It was so good! Then I got up to find that my dad had decided to show his support by washing my car. My mom always tries to support me by telling me to stop working, or by offering to help (I'm tempted to give her some stats to analyse and then she'll never do it again)!

So I went from home to the zoo where I helped with another workshop. Well, mostly I sat giggling with Anoushka and Neville (Luke said OK a lot. I counted 86 before I gave up, and Neville kept asking for the running total). I also got to know some of the kids. They're nice, but also very much little teenagers and I felt very old after about half an hour of discussing learner's tests and cycle tests and getting drunk and falling down the stairs (and the 'Oh my gosh,what a coincidence I wear contact lenses too! from Ashley was really a highlight).

After that I had to go to my brother's engagement party. It actually really sucked because I was havving fun, and I was chatting to some of the people who work there (the one guy had a hectic cast on his arm from a crocodile attack, and was nice and sensible about it, saying that if you work with big animals with big teeth it's a bit inevitable). They even offered me a behind-the-scenes tour of the reptile section!

The party was amazingly cool for a family function (except Luke smsing to say he'd met the baby chimp :( ... So not fair!) mainly because I had very little to do with either family. A few friends had been invited, and they happen to be good friends of mine too, so I had an awesome catch-up session. Plus the best man and some other guys were there so I got to listen in to the bachelor part plans.

The best was to get him really drunk (how they plan to do that is beyond me, he's a pretty light drinker, like me) and then get a cast put on to his leg or arm and leave him to wake up with a note saying 'we're so sorry!' and then leave it for a week or 2 before telling him it's a joke. There was also the full-body mercurochrome bath (so when wearing a suit there's no problem, but after the wedding...).

My uncle, who taught me to dive, also invited me to Sodwana bay for 2 weeks in December. I think I'm in the desert then though :( which is really horrible because it's with his friend (incidentally also called Neville) who is a total marine life expert and will teach me all about the stuff I always see but can't remember long enough to get to my field guides. That was also the first time my parents heard that the desert trip was happening, so there's a bit of drama there too.

After that I went to work, because it's just down the road, and I had to plan the concert itenerary with the friend I'm going with.

I got home to have a serious talking-to from my mother along the lines of 'promise me you'll have 5 litres drinking water with you at all times!' and as far as 'remember that the desert is bigger that you are!' and so on. I promised her that the university couldn't lose me because it's bad PR and they wouldn't want to jeopardise their funding. It seemed to work.

Still no word from the German lady though...

And I'm going dam-diving in the next few weeks to sort out my weighting!

Jo is going to kill me!

Here is the view from where I was working on the roof (courtesy of Luke who isn't afraid of standing on the wall). I hope it helps to explain why I'm so desperate to get out of Joburg! 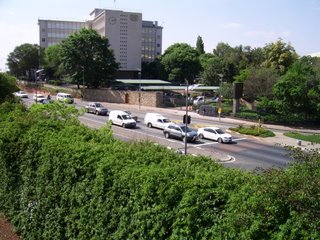 I can't believe you counted my 'Okay's! How rude!

A fish is swimming along and hits something hard.

dam diving sounds cool.
the desert is hot.
i hope you have water.
hey, did you know that the desert is bigger than you are?