I ordered my new camera today, I'm so excited!!! It's a 6m.pixel, 12x optical zoom, with a supermacro that's so good you can practically balance the lens on what you're photographing!

My history as a photographer has been relatively awful. In 2004 I was unable to take a photograph that people would actually be able to identify what was in it. really. I was that bad.

It was really horrible because I loved photos and would spend hours looking at them and going through books and internet sites...

So at the end of my second year I worked full time selling dog and cat food and saved up, and on new years eve I went and bough a beautiful little Casio QV-R51 camera. I think I took about 70 photos that day.

By the end of the holidays I was an average photographer and the camera went everywhere with me.I became the queen of taking photos of people in awkward moments and stuff.

After about a year the camera started to bug me. I had qualified as a speciality diver with underwater photography in the meantime and the limited zoom and macro was annoying and restricting, and I started considering selling it and getting a better camera.

The dicision was made for me when, about a year later I went on a field trip and somebody (possibly me, I really don't know) didn't zip up the camera case and it fell out and landed on the rocky shores one night. I realised how much I loved it because I missed it SO much, but fixing it would have cost more than getting a new, better, camera.

So I got a little Samsung on special and it's been getting me through since then, but I really don't like it, I use it because I must have a camera, but I don't like it particularly. I don't know it very well and there are severe limitations in terms of EVERYTHING being automatic when I want manual.

so now I'm moving up to a nice new, shiny camera. I'm fetching it on Saturday. I can't wait! The desert trip is going to be so cool now that I can take photos with a cool camera! and I will... lots of them...
Here it is: (not my photo, it belongs to canon (the website is www.canon.co.uk or something, so please don't sue me!). 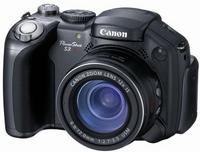 Very nice. I'm thinking about taking a photography course or something when I get back to the states. I see stuff I think looks cool and my camera does an ok job but I want to justify a nice camera!!!

Helen! You linked the photo from Canon's website! *gasp*.. evil little men in dark suits WILL come and find you one night and then will feed you to a giant Helen-eating camera!!! har har har!

I would love to see your photos one day. I have always wanted to go on a camera course, just have never got around to it.

Photography can be SO rewarding if you put time and effort into it.

I love it, but I must admiot, I've got very lazy since I got the crap camera. On my awesome little casio I did everything manually except teh aperture (which it wouldn't let me). But the crap camera doesn't even have auto-focus, which is so annoying...

So I've slipped into the bad, BAD habit of just taking millions of shots on auto mode and generally one of them is ok.

My photos aren't great yet. Nothing like Lydias (if you want to see amazing photos, she has the most amazing camera, and an eye for what to photograph and how to work the lighting and composition and stuff.

I'm learning though. One day...

Thats the awesome part of digital photography though. You can learn from just playing around until you find somethign that works for you. Once you figure out the basics (aperture, shutter speed, white balance) and how they interact and affect stuff like the depth of field and stuff, it's just playing around with them.

I'm definately not one of those people who always goes on about the art of photography being lost since we went digital. But, on film cameras I SUCKED!

I should really do some work now!