I uploaded my photos!

I used to do a photo-a-post thing, but it just ran out of steam because all of the photos I have are of fantastic trips, when I wasn't stuck in Joburg and exhausted and angry with my supervisor (who called by the way, and asked a whole lot of questions about stuff that we'd duscussed before). Lookng at those photos is very therapeutic sometimes, but right now it's just frustrating.

So anyway I've taken photos at wits now (Luke helped) and I finally uploaded them.

Here is Melville being all scary. She's really cute, but if you'd ever been mauled by her, you'd also call it scary! 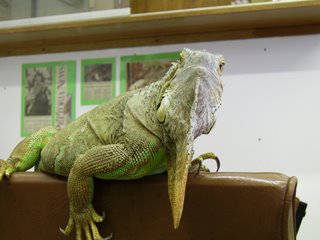 She's doing a lot better at the moment, I stuck some newspaper along one side of her tank, so now she has a 'secure' area to sit. She was still clawing at the door, and she shredded her newspaper again, but I think she actually ate a bit and her water bowl was still upright by the end of the day so it's progress. In the meantime I'm fending off questions from people who think I'm suicidal because of all the cuts on my wrists from her claws. Fortunately today wasn't as hot as it has been, so I could wear long sleeves.

Here's an example of some of her more minor work. I googled 'iguana attack' yesterday and saw some photos of people who have really been 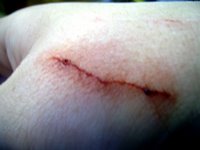 attacked, and I must admit, my little cuts and scratches look pretty minor when compared to some of the bite marks. She's agitated and a bit aggressive, but she never tried to bite me, except once when she got stuck on top of a computer monitor and I think my detaching her was a bit traumatic to both of us. She sat and threatened me for a while afterwards.

Here she is being scary again. I wish I could get a photo of her being cute. Today she was sitting staring at the newspaper on the side of her tank, and it looked like she was reading it. It was so sweet! And at night when she lies down flat and spreads her dewlap out and she goes so fast asleep you could drop a grenade next to her and she probably wouldn't notice. 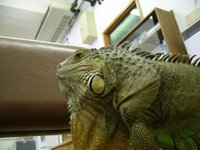 I finished my reading for that essay today. I'm going to work on a skeleton for it before I go to bed and then work on it tomorrow. Hopefully I'll have at least a draft done by the weekend so I can spend the weekend measuring animals and starting on that set af analyses. Hopefully the stats will be a bit nicer to me this time! I'll be so upset if the results aren't significant again. It's not that I don't understand the importance of a non-significant result, it's just that when you're doing something that nobody has done before it would be so exciting to find out something significant as it would open up so many new research possibilities!

I must really stop whining, I have an awesome field to work in,with a lot of passionate (and odd) people. It's just a bit tough at the moment, and I guess that if I get through it, I'll be able to call myself a qualified researcher, and I wouldn't want a researcher to not know how to work hard!

granted, i wouldnt give her a good morning cuddle or anything, and that's where jeremy the puppy wins hand down, but i guess melville wins in the whole body guard thing.

jeremy is scared of poodle puppies

Melville is adorable! I love her...;)

i mean, its so inconsiderate of people to actually expect us to do stuff

Hey helen, you know i thought you were hellen keller. Omgosh.. sorry for being so lame. Usually not like that/
AHA.. I AM human though.
Nice meeting you too. where are u from?

phil is back he is back and he is HERE!

i love him ... suddenly ! ;) hee hee i shalt be visiting 'my dear friend' Melville loooots.