So I was still completely miserable yesterday. My voice is all crackly and about an octave deeper than usual, I'm coughing all the time and my nose started running. At lunchtime, after a very frustrating morning of discovering that one of the pieces of equipment essential to my work isn't working (and it was fine a few weeks ago...) Luke dragged me off to get lunch. All I wanted was soup, and for some reason (this isn't the first time) nowhere on campus had it! I had started feeling really nauseous, so anything else was out of the question (scary stuff: I'd been helping mount UV lights for the honours student's lizards, and he's had the same flu. Apparently vomiting is scheduled for me for the next day or two...).

My supervisor was also around for the first time in over a month (he was conferencing overseas) and I had to get him to let me into the lab after I locked myself out, and then he had to take the offending piece of equipment to be fixed after it became very evident that if I had to handle our scary Russian maintenance guy it would end it tears.

By the end of the afternoon I was sounding really bad, but I'd got one of the new programmes working with my equipment (I don't understand the readout, but we're getting there!) so I went home and stopped for soup along the way. And it didn't work.
Admittedly it wasn't my old standby tomato, it was a fancy tomato and red pepper with basil, but I still coughed all evening and ended up waking up repeatedly until at 3am, when I was coughing so hard I had tears streaming down my face (from impressive bloodshot eyes!) I dosed myself up on decongestants cough syrup (I restocked along with buying soup), painkillers and throat lozenges. I'm feeling better now (i.e. I can breathe again) but I'm tired and I don't wwant to go oout tonight but I promised and I have to get a new DVD drive for my computer and go pick up equipment and figure out the stupid readouts. It wouldn't be so bad if the soup had done its job. I'll have to go back to plain tomato tonight and see if there's a difference.

Oh, and as it was very rightly pointed out, I haven't posted a picture in a while! Here is the view from one of my trapping sites. The house I stay in is at the bottom left, on top of the little hill (the line of trees hides it). 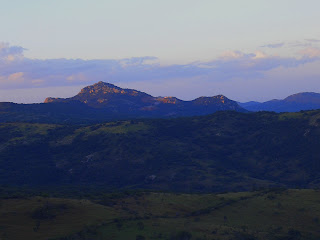 You need to rest, we all don't want to be reading a post you've had to write from the hospital because you got too worn out while sick. There, now I really sound like a mom. :P Have to practice for when my Lily gets old enough for me to lecture.

I absolutely HATE having a cold or flu, but I haven't found anything that makes me feel even slightly better- except for twenty hours per day of sleep, of course.

I'm going to have to concur with the the sleep remedy . . I would have offered "rest" but you are too literal and would argue you were resting while still working. Sleep and get well.