insights into life from staring at the TV all day

I finished the first season of 'Prison Break' last night. It was so frustrating! I've also been having trouble sleeping and I think I got too involved in it and I ended up reading Steven King (who wrote some passable stuff apparently. Maybe the books I tried before were just the bad ones. Or maybe I was just lucky to get the good one this time) until early this morning when I passed out over 'Hearts in Atlantis.'

I went through to work to drop off the DVDs to fins that Laurin the One Who Talks was there. she's unbelievable. Quite often I just walk away while she's talking. It doesn't seem to affect her and I get to avoid whatever health problem she wants to go on about this time. she did have one entertaining story of when she worked at hotel school they locked her in a fridge for over 2 hours. Jo was almost twitching by the time I got there so we ended up joining Drew and Lara for lunch next door. It was fun, I haven't seen Drew in months and he's always entertaining. He told me that all I need to shut Laurin up is 'a small case of death' and it'll be just fine. Maybe his idea of his ability as a lawyer is slightly inflated?

After work I waited for Carla to call to tell me to come through for her mom to take measurements for my dress. Weirdly enough she never called so I ended up at home watching 'Match Point' - don't be fooled by the presence of Scarlett Johansson - it's an interesting movie albeit slightly depressing. The style of filming was very aggressive (at ome stage they filmed the main character through a mesh fence) and very clever at the same time. Lots of symbolism but it is very obvious and quite harsh sometimes. I enjoyed it, but I had to admit that the main character's 'downfall' didn't really seem too bad to me. Which is really scary because he did some terrible stuff, but I found myself surprised at how bad he felt about it all. Which is why I think TV has desensitised us all. Maybe after 'Prison Break' where someone dies almost every episode, or 'Lost' where according to the cast 'as soon as your issues are resolved you're going to die' the whole concept of murder is somewhat skewed. Maybe if I'd watched it six months ago it would have shocked me more. It was a good movie though and very cleverly acted.

Here's a quote "The man who said "I'd rather be lucky than good" saw deeply into life. People are afraid to face how great a part of life is dependent on luck. It's scary to think so much is out of one's control. There are moments in a match when the ball hits the top of the net, and for a split second, it can either go forward or fall back. With a litte luck, it goes forward, and you win. Or maybe it doesn't, and you lose."

Here's a picture of sunset on our second-last day in the Kalahari. It was really really pink! 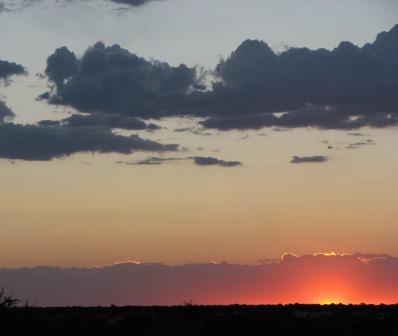 I have more photos but they aren't uploading for some reason. So watch this space!