My boss has turned into a monster. She's forcing us to wear Christmas hats while working (if we're caught without them we'll be fired on the spot) as well as playing Christmas music over the sound system. We only had two CDs - one orchestral and the other instrumental with pan-pipes and things... but now we have about 5 including the 'Beatmas' CD which is performed by 5 guys dressed in Santa suits and sunglasses.

The hats are all pretty disgusting. They're usually only worn on Christmas eve and Christmas day, but we have 9 staff members and I don't think the hats have ever been washed before. I flat out refused to wear one so Jo made me wear hers. It's clean but it's also covered in flashing stars. The customers find it very amusing and all think that they're unique in their comments (I mean 'Nice hat!' is so original of course). The best was one customer who said "you're being forced into the Christmas spirit? Ho-f*cking-ho!" I liked him!

It was weird though. Between our playing baseball with a plastic bat (courtesy of the kiddies meals from Nando's) and various Christmas ornaments and messing around with the left-over 'magic candles' from Springbok we started to get into the whole Christmas thing. we'd have taken the hats off in a heartbeat if we dared, but Matt1 and I started singing along and dancing around to the songs and stuff and it wasn't entirely bad. It was really strange!

Here's a picture of the road to the study site in the Kalahari. There can't be many people whose route to work looks like this! 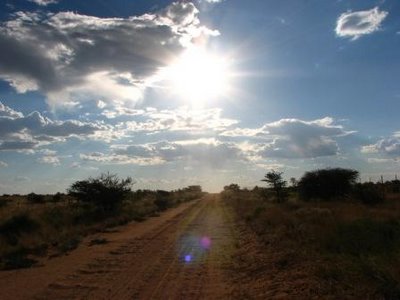 what a pretty photo!!

i bought a christmas hat to wear! its fun!