Last night I was planning to finish my essay, but i realised I'd forgotten to back up all the work I'd done on the weekend onto my flash drive. So i went home to work on it to find that we had no electricity.

I had a minor breakdown, threw a tantrum at some poor unsuspecting Eskom person on the phone and went to work for some sympathy. Joey and Lara were very sympathetic. chris isn't speaking to me again for some reason. Don't know what I did this time...

Then I went home (buying peanutbutter curry - don't knock it till you've tried it on the way in case there wasn't any power yet) to find that the electricity was still out,and the Eskom workment weren't there anymore. So I threw another tantrum ast a very annoying Eskom guy, who responded by putting me on hold.

I read a few books that I needed for my write-up and fell asleep as the candles slowly sucked the oxygen out of my vicinity. I woke up to find wax pouring all over my first draft, narrowly missing two library books, and forming a gleaming puddle on my carpet.

My birds also panicked, and Rerra hurt his wing by flying around their cage in a panic. he was bleeding pretty badly, but it clotted ok.

the power came on at midnight, so i got up, saved everything to my flashdrive and worked for about half an hour before I got bored. I also got to read a very amusing email from the lady who we're going to the desert with (how's that for bad grammar?). she's trying very hard not to pry, but has to know if Luke and I are 'just friends' or a couple, plus a list of every possible eventuality in sleeping arrangements, from us haivng a bedroom and her taking the couch, to kicking Luke out the the living room while the two of us get the bedroom...

It's very sweet of her to try ask it so discreetly, but it's also so funny to read it that I just can't reply because I start giggling.

Oh, and speaking on giggling, the Australian inadvertently learned 'Poepel' today, but keeps getting the definition confused. I think he's also trying to get me back for forcing him to repeat all of his Afrikaans phrases over and over, by forcing me to repeat Aussie slang and then commenting on my pronounciation. Which is pretty good considering I speak English! He's also messing with me a lot, it's like having my brother around all the time, except I can't tell him to 'root' off.

I also got the first 2 sections of my write up that I sent to my supervisor back, COVERED with comments. Some of it's really little stuff that I just didn't know (like if you have a measurement you have to have a space between the numbers and the units. And instead of bullet points you number each point and separate them with semicolons), and some of it's basic stuff that I should have known, like naiming the brand of soap I used.

and some of it is major points that I knew I should have addressed, except that I don't know the answers.

So I'm feeling partly good that I've got feedback and I can fix stuff, but also really stupid and tired and annoyed with myself.

I've also been thinking about the future (if one more person asks me about what I'm doing next year I might just cry). I mean, everything I've ever really worked at has had a mark at the end. I learned music to get into orchestras and play exams. I went at school to get matric. I went to university to get a degree, I'm doing my honours to get a good honours degree. And the thought of doing two years of research without a nice little symbol (preferably an A) to keep me feeling validated and ok with life. I don't think I have the motivation.

Plus, as much as I love the department (I mean going shopping to find a 'poepoel' to raise frogs in?) and the people and the stuff I learn, I don't know...

Sorry you guys have to sit through this again, it's what happens after 10 pages of putting spaces between numbers and letters. 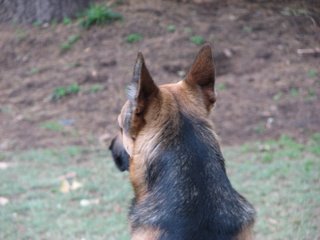 Oh, and some information on Hexane (courtesy of wikipedia). I have 2 years and 10 months until I'm clean!

"The acute toxicity of hexane is relatively low, although it is a mild anesthetic. Inhalation of high concentrations produces first a state of mild euphoria, followed by somnolence with headaches and nausea.
Chronic intoxication from hexane has been observed in recreational solvent abusers and in workers in the shoe manufacture, furniture restoration and automobile construction. The initial symptoms are tingling and cramps in the arms and legs, followed by general muscular weakness. In severe cases, atrophy of the skeletal muscles is observed, along with a loss of coordination and problems of vision.
Similar symptoms are observed in animal models. They are associated with a degeneration of the peripheral nervous system (and eventually the central nervous system), starting with the distal portions of the longer and wider nerve axons. The toxicity is not due to hexane itself but to one of its metabolites, hexane-2,5-dione. It is believed that this reacts with the amino group of the side chain of lysine residues in proteins, causing cross-linking and a loss of protein function.
The effects of hexane poisoning in humans are not permanent, and usually disappear gradually over one to three years after the end of exposure."

The only reason I know what I'm doing next year is because it is the natural order of things that 4th year law comes after 3rd year law.

This time next year - trust me, I'll be in your exact same position. I've been thinking already of the millions of things I might do - from articles, to teaching English in Japan, to doing honours at UCT, to starting my own company.. And i just don't know what to do.

I think we should call it the Quarter Life Crisis... because we have only ever known notions of studying and being supported by foggies.. and it truly is a little scary (For me anyway) to be pushed into the big wide world.. it's exciting too, but it's still a little nerve wracking.

I think the best thing is to create a list of things you might want to do... and then examine their advantages and disadvantages.. maybe you'll have a clearer idea after that?

I did that a while ago, my list covered everything from cruise ship toilet cleaner to A-rated researcher.

Quarter life crisis definately fits, it hit me when I turned 20, I'd lived a quarter of my (usable) life, and done nothing except study...

I am living by the principal of 'put off work until you REALLY have to!' Thus, in my humble opinion, you should study for as long as possible. After all, you are only a student once and you won't get to enjoy this care-free existence again (care-free...Ha!As if...)

But Cruise ships sound good! I think that taking a year off has its merits and if you can get a job not related to your field of study, it helps coz you will feel all inspired to return to studying if you feel like it!